On  Saturday, May 2, 2020,  ReOpenMDNow conducted a statewide "Cross MD Road Rally" to protest Hogan's shutdown of Maryland social, religious and economic life.  It started in Frederick and ended in Salisbury.  Congressman Andy Harris spoke in Salisbury.

Because of other commitments, I couldn't join the rally in the beginning.  I caught up with them at a lunch stop on Kent Island.  We then had a motorcade down Route  50 till we got to Salisbury.  We were slated to use one empty mall parking lot.  Some Salisbury bigwigs decided they didn't like that (I don't know all the details) but we were able to relocate relatively painlessly to a Kohl's parking lot just a few minutes north of our original location.

I understand that State Rep Dan Cox was slated to give an opening address in Frederick.  However, MD State Police informed him that if he attended the rally, he'd be arrested.  I am happy to learn that Cox and some other delegates have filed suit on account of that gross violation of First Amendment rights.  The Maryland Troopers also pulled participants off the road as they were processing along Interstate 70.  Again, another violation of First Amendment rights that one might have found in a history text regarding Nazi Storm Troopers.  In the video, you'll hear Congressman Harris allude to that. 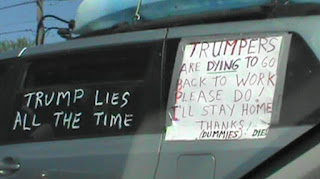 We had heard that counter-protesters might try to disrupt us along the way.  I myself didn't see any of that.  When I was driving to the Kohl's lot, I saw a vehicle with the signs that you see to the right.

When I first saw this, I thought how the sign on his car was quite typical of the thinking of liberals.  He admits that he's simply willing to laze around and do nothing while good people strive to be productive.

A few minutes later, I realized this fellow was malevolent as well as lazy, as you'll see in the video.  The long and short of it is that he got into the parking lot before I did and when I emerged from my car, he had shoved one of our people - with his car!  I believe the term is "vehicular assault".  The cops put on a show of interviewing him, but he wound up just driving away.  Why was he not put in handcuffs?  A few hours ago, MD State Troopers were pulling us over for simply driving on the freeway.  In Salisbury, a liberal deliberately strikes someone with their car, and the local cops just send him on his way.  I don't know if he even got a perfunctory "slap on the wrist".

There will be other actions - such as a protest next Saturday at Church Circle in Annapolis.  I believe it starts noon, but will confirm.  In the meantime, here is my video of the rally.

Posted by Restore-DC-Catholicism at 11:07 PM