Now that all the thugs and hoodlums have returned to their mommies' basements (or converged on Seattle) and the cleanup has begun, let us take a hard look at a cabal that seems to have taken the lead in organizing these riots.  And yes, they were organized and fomented.  We turn our attention to a bunch called Black Lives Matter.

There is no mention at all of addressing the real problems of impovershed people (and not just black): high crime, dependence on government, denigration of marriage, drugs, etc.  In fact, some of those so-called "beliefs" and "goals" would only exacerbate their problems.

If you detect a bit of put-down of men in reading their beliefs, you are not imaging things.  BLM was founded by three feminists.  IMHO, no self-respecting man can go along with this crap or he will earn the title "hen-pecked". 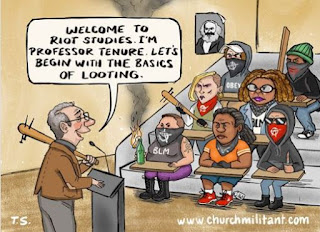 Mass Resistance has some more history on this outfit, worth a read.  They delve more into the sordid alliances in which BLM is embroiled.  All these progressive organizations intertwine with each other.  We see that addressed in this LifeSiteNew article.  Regrettably, one of those "social justice grifters" is the US Catholic hierarchy.  Didn't we see that made manifest by the disgraceful actions of the archbishop of Washington DC?  Check out my three previous posts.

A key goal of the BLM crowd is the abolition of local police departments.  Sadly, some liberal loony politicians are glomming onto this; the Minneapolis City Council and NYC Mayor DiBlasion come immediately to mind.  So just who do these politicians think they will call, should someone be breaking into their homes?

Michael Hichborn of Lepanto now brings us the revelation that another arm of the US Catholic hierchy is aiding and abetting the BLM ilk, particularly in finances.  Yes, it's the Catholic Campaign for Human Development (CCHD).  He has gathered and presented evidence that CCHD is funding organizations calling for the killing of police officers and fomenting riots just as we saw last week.  Doing some quick arithmetic as I read through the artilce, riot-fomenting groups have received a total of over $1M of Catholic dollars.  Several people have been murdered in last week's riots, some precisely because they were police officers.  The money that CCHD sent to these violent groups implicates them in those murders.  The CCHD has blood on its hands.  Moreover, anyone who contributes to the CCHD, with knowledge of these donations, also must answer for the mayhem and murder of these past few days.

It will do no good to ask CCHD to reconsider their grant practices.  They were founded by allies of Saul Alinsky for the express purpose of diverting Catholic dollars to seditious and atheistic organizations.  We simply must stop giving to CCHD.  I stopped decades ago.  This CCHD beast needs to be starved of cash.
Posted by Restore-DC-Catholicism at 11:13 AM