As many of us heard by now, a bunch of antifa-blm-whatever spoiled-brat thugs descended upon a six-block section of Seattle, setting up their own pseudo-nation.  They call it "Capital Hill Autonomous Zone", or CHAZ for brevity.  They were assisted by the bubble-headed mayor of Seattle, Jenny Durkan, who likened it to a "summer of love" (her words).  She ordered the police who were stationed in that area to leave the station, effectively throwing them under the bus.

This bunch has set up walls and "check-points".  Hey!  If nothing else, those twerps are learning that borders actually serve a purpose!

But reality is starting to hit some of these refugees from Mommy's basement!  I don't know how many of them actually worked one day of their lives, but they seem rather unacquainted with the concept of earning a living and that the necessities of life don't just magically appear at one's beck and call.  You want something?  You pay for it!  That means one must work in order to earn the money to pay for needed items.  That seems like a logical concept to most sane adults, but that reality seems to be crashing upon the Chaz-dwellers' pipe dreams.

Get a load of this.  One starry-eyed individual left their tent for a while.  When he/she came back, they found their tent raided, with laptop, $400 cash and supplies gone.  "Welcome to communism, it is good, suck it up" was the reply they got. 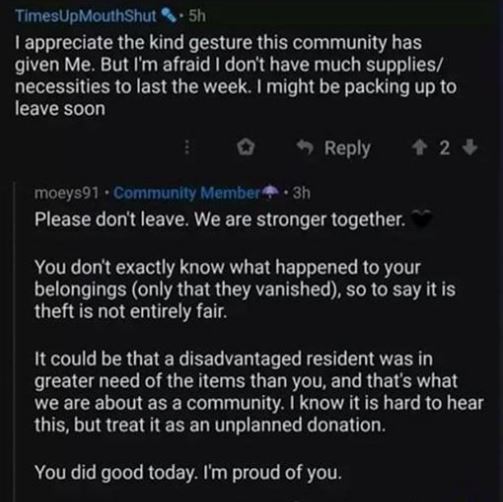 I wonder if the Chaz grand poobahs would consider murder to be an "unplanned demise"?  But I digress!

Now that "time's up" is on the receiving end of the politically correct crap, what is his/her minset now?   Will he/she wake up, smell the coffee and perhaps grow up a bit?

Others are sending out pleas for free goodies.  To wit: 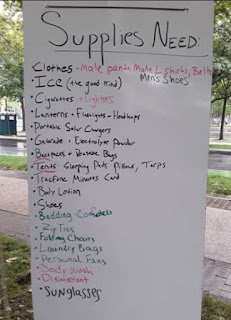 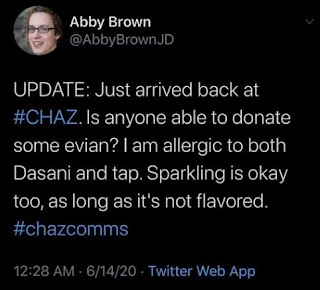 The hubris evinced by Abby Brown is laughable.  Perhaps she never heard that beggars can't be choosers.  Anyone who really needs water does not get persnickety about the precse brand or flavor of it.  Perhaps it's just satire.  I hope so, for I'd hate to think someone is that dense.  I truly hope that no one is so stupid as to pamper these overgrown brats.

The flow of supplies, if any, should be halted and then the sadder and hopefully wiser marauders will sheepishly come out of there to seek out campus safe spaces or their mothers' basements.  The local government could accelerate that process by cutting off water and electricity to that area.  The poor dears wouldn't be able to recharge their smart phones!  The horror!

At some point this farce must end.  The president has stated that he will do so if the mayor and governor refuse to do so.  I call upon him to please stop the dilly-dallying and get on with it.  There are innocent people paying the price for these shenanigans; for their sake - and to prevent any similar stunts in the future - real law and order must be restored and the perpetrators punished NOW.
Posted by Restore-DC-Catholicism at 4:45 PM