Last week, on Memorial Day in Minneapolis, four police officers used excessive force on Goerge Floyd, causing his death.  Floyd was on the ground.  At one point, three officers had their knees on him.  Derek Chauvin had his knee on Floyd's neck.  This lasted for almost 10 minutes.  The police relented only when paramedics showed up.  Floyd was later pronounced dead.

There is much video on the internet.  Given the reckless attitude evinced by Chauvin, as he stares into one of the cell phone cameras, hands in pockets while kneeling on Floyd's neck, no one can doubt that he knew what he was doing.  The four oficers were fired and Chauvin was arrested on charges of manslaughter and third-degree murder.  I do not know if Minnesota recognizes depraved-heart murder as second or third degree murder. 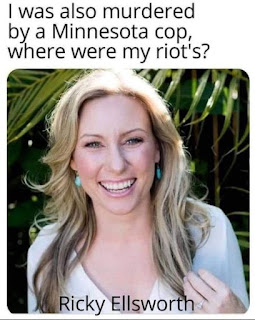 There is some talk of Floyd and Chauvin working for the same club last year, so it's quite possible that they knew each other.  Both Chauvin and Tou Thao (one of the other officers) have both been subjects of internal investigations through the years.   Right away we know now that while racism may have been a factor in this murder, that has not been definitively proven.  In the facts just stated, including the possibility of Chauvin and Floyd being acquainted from previous employment, we can surmise other motives as well.

However, the politically correct knee-jerk reaction is to cry "RACISM!" before there has been one hearing on this matter.  Sadly, but predictably, the USCCB, the Archdiocese of Washington and the Archdiocese of Baltimore have hopped on the politically correct bandwagon.  Here's another one from the USCCB.  Notice how both say they are distressed to see another video of a black man being killed?  Why did they feel it necessary to specify a black man?  Would they have been less distressed if the victim were white?  Here's a "case-in-point".  The meme is incorrect; the woman's name is Justine Damond.  She too was murdered by a Minneapolis cop.  I did not learn of her until I saw the picture on Facebook.  Why didn't I hear of her before?  Where was the public outcry for her?  When did the nation's bishops wax mournful over her?  For that matter, are the bishops going to pay this gentleman any attention?

Mayhem is happening all over the country, and not as spontaneously as some might like to pretend.  One rioter in fact is asking questions - such as, why are pallets of bricks mysteriously appearing at protest locations?  They do come in quite handy when looking for something to hurl through a shop or car window!  Might it be these folks?  One of their flyers was found in the streets during an outbreak in Baltimore.

If some of the rioters go to trial, they will need lawyers.  They need never fear, for two liberally-trained lawyers were operating right beside them, supplying the rioters with molotov cocktails and other explosives.  These lawyers are in custody now; whether or not they'll serve jail time remains to be seen.  They should at least be disbarred - however, there are the Clintons and Obamas so, oh never mind!

Tucker Carlson has stated that the mainstream meda are fanning the flames of this mob violence.  I regret that for the most part, so are the US bishops.  If you read that article about this "friends of democracy" bunch, you'll see talk of "friendly law enforcement" and other covert allies.  Many police departments are standing down; might they (or at least high officials) be in cahoots with the thugs?  President Trump said he would deploy troops and National Guards to do what local police can't (or won't) do, utilizing the Insurrection Act.

I will have more to say on the bishops in my next post, for Archbishop Gregory disgraced himself big time on June 2.
Posted by Restore-DC-Catholicism at 5:33 PM