Whew!!  That was a close call, but TSA agents - alert as always - stopped a nefarious terrorist in St. Louis from boarding a plane with his deadly weapon.  A mug shot of the dastardly fiend is below: 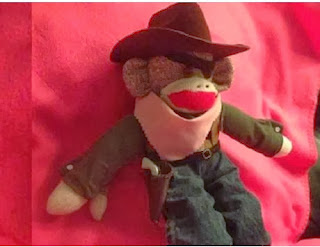 I hope this picture of this terrorist doesn't cause too many nightmares, heart attacks, etc.  Apparently his name is Rooster Monkburn - a sock puppet.  Rooster was allowed on the plane, according to his accomplice, masquerading as his owner.  But only after the deadly weapon hanging from his side was confiscated.  The ever-thoughtful TSA agents were concerned, you see, that it might be confused for a real weapon and might be used in an actual threat.  I cautioned the tender-hearted among you, please don't look at the weapon if it will cause you to faint.  For the rest, here it is! 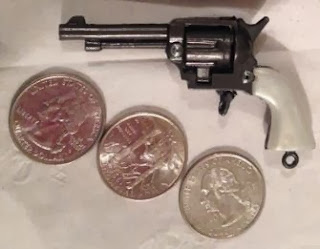 I wonder what caliber it fires?  But at least it's not quite as big as the pop-tart pistol!  But ladies and gentlemen, we can all breathe a sigh of relief knowing that the TSA is there to waste our tax dollars as they frisk sock puppets and confiscate toys that aren't much bigger than their thumb-nails.  The feds!  Don'cha just luuuv them????
Posted by Restore-DC-Catholicism at 11:30 PM