Our Lord Jesus Christ founded the Roman Catholic Church, that is, the One True Church, for one reason: to help souls get to heaven.  That is her sacred charge: from the Vatican on down to the individual parish.  In Baltimore there exists one parish that is doing the precise opposite.

I speak of St. Matthew's Church on Loch Raven Boulevard - quite close to one of my early childhood homes.  While we usually attended St. Pius X, occasionally we would attend Sunday Mass at St Matthew's.  In those days, during the early 1960s, all Catholic Churches embraced their God-given mission.  St. Matthew's has now reneged and is actually greasing the skids to hell for many of its parishioners.  By affirming sodomites in their mortal sins, they are showing anything but charity towards them, for true charity leads away from sin and to heaven through repentance and the Sacraments.  In fact, because they are formally and materially cooperating in mortal sin, many in the parish who participate in this enabling of sodomy are guilty of mortal sin - most especially the pastor, Father Joseph Muth.  The proverbial "millstone around the neck" appears to be a parish organization called LEAD; I'll provide screenshots of the website below.

There is quite a detailed article regarding the parish on the website of the Not-At-All Catholic Reporter.  You'll see that this LEAD outfit is not concerned at all about leading homosexuals from their life of sin into a truly Catholic life.  No, instead they revel in the fact that they have two "married" lesbians (one of them being a former Catholic sister) and that they participated in Baltimore's gay pride parade last summer.  Most disturbing is that Auxiliary Bishop Denis Madden said of LEAD, "I was impressed by them.  They are good people."  If Bishop Madden thinks that folks who are literally leading others to perdition are "good people", I can only surmise that he himself jeopardizes his own soul by giving his own affirmation to sodomy. 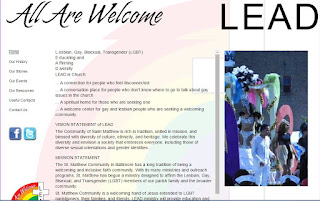 Here are the screen shots with some commentary.  Then please continue reading below.

What you see to the right are pictures of Baltimore's gay pride parade, a celebration of perversion and
mortal sin.  One gets the impression that this webmaster tried to get pictures that weren't too vile, but this one is bad enough. 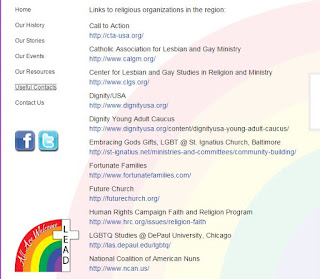 Now you see on this subpage is a list of the usual "gang of suspects": every gay rights group that has at least a thin "katholyc" veneer.  So does that really include the National Coalition of American Nuns?  No wonder so many of these orders are dying off!  Apparently there is another parish in
Baltimore that is similarly infested: St Ignatius.  We'll look at them at another time

Here is the contact information for the prelate of Baltimore, Archbishop William Lori.  Contact him and ask him what he intends to do about this situation.  As Archbishop, he is the chief shepherd of this parish and he bears responsibility before God for each and every one of those souls that is imperiled by this scandalous situation.  Given the fact that the Not-At-All Catholic Reporter has broadcast this debacle nationwide, there is no way that Archbishop Lori can plead ignorance.  Insist that Lori disciplines Father Muth; while he's at it, he might want to address serious matters with Auxiliary Bishop Madden as well.

Posted by Restore-DC-Catholicism at 11:30 PM