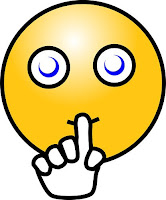 At least, it seems that the Franciscan Monastery in Washington DC tried to keep it a secret!  And why do I think they tried to keep Fr Rohr's appearance "on the q-t"?  Well, let's go to the Monastery's web page.  Look to the right under "events".  Notice how all the events are fairly well-described, except one!  It's called "October 23, 2010 Event."  Now doesn't that seem like an odd way to publicize an event?  I might think that if one were trying to draw attention, they might do something better than give it that non-descript title.  Could it be that the Franciscans simply don't want to draw attention to it?  Now why wouldn't they want to do that???

Let's sneak a peak by clicking on that date (or this link if you'd prefer).
Ooops!  No details there, but it looks like we have a choice of pdfs.  Let's click on the first one called "October 23, 2010 Event.pdf".   Therein lie the details of the appearance.  I suspect they didn't want decent Catholics to get wind of this as we did with their Chris Matthews dissent fest in late June.  Remember that?  They were so reluctant to face us that night that they had to sneak away to some secret location in Bethesda Maryland (they sure do love secrets, don't they?).  Now some might point out that these folks weren't trying to keep Rohr's appearance a secret, since it is in the pdf file.  I think they were.  Rohr was only mentioned in a pdf file.  Pdf files are essentially grraphics; their contents cannot be googled.


Father Rohr is rather notorious for his "male spirituality" work, which has homosexual undertones to it.  I will link to a number of works that will give greater detail.  Father Bryce Sibley, in his analysis, goes into Rohr's "male spirituality", as well as touch upon Rohr's erroneous understanding of original sin and his heretical notion that Christ's death was not necessary for our redemption.

Stephanie Block has done some research on retreats that Rohr has given for men.  She points out that his retreats often feature at least some of the men taking off their clothes.  She quotes a statement of Rohr on this: "I never encourage nakedness, as such, but it always happens."  Ladies and gentlemen, I've gone on a number of Catholic retreats, and not once have I been "inspired" to sin against modesty.  I feel safe in assuming that such is the case for the majority of my readers.  Rohr goes on: "We often have camp-fires, and I know some of you have been at these where it happens, so you know what I'm talking about. Always, always, there's some guys — I mean, is it in their hard wiring? — they'll strip and have to leap over that fire, burning their balls. . . .1 don't know what it is. They're the 'real' men, who can leap over the fire, naked."  Please forgive the crass language there, but such is the language that proceeds from an ordained priest.  Gentlemen, I believe it's reasonable that very few of you (I do have to make allowances for liberals reading this blog) have that kind of "hard wiring".

He's big on something called the Emerging Church Movement.  To get an idea of what the "thinking" is, please watch this clip of him.  Yes, I know he's not wearing clerics.  However, when a priest spouts drivvel such as this, perhaps it's just as well that he's not readily identifiable as a Catholic priest.  (Click here if you cannot see embedded video).

He founded an organzation called Center for Action and Contemplation.  It's chock-full of new age junk.

I suppose it's no secret that Trinity College is welcoming him.  Recall that this institution unleashed upon our nation such graduate-menaces as Nancy Pelosi and Kathleen Sebelius.  Recall that after Pelosi became Speaker of the House, they had a big celebratory Mass, with the notorious (and now deceased) Fr Robert Drinan as main celebrant.

Stay tuned for more on this.
Posted by Restore-DC-Catholicism at 11:56 PM