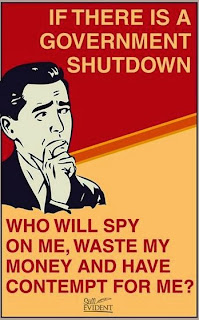 At midnight tonight the government will "run out of money" and will be shut down (except for military, postal workers, air traffic controllers, etc).  Actually it's long been broke, but that's another story.  I regret that the House GOP didn't hold to their principles but are settling only for a year's delay in the obama-care monstrosity, but it seems that isn't enough for the progressive leviathans in the Senate and White House.

So let it shut down.  It's happened before and somehow civilization still struggled on.  Hey!  Does that mean National Public Radio will go dark?  Now wouldn't that be a gigantic improvement for the airways!

Unfortunately, but not surprisingly, we do hear wailing and gnashing of teeth from some of the progressive infestations within the Church.  Father Larry Snyder, president of Catholic Charities, voices much angst at the prospect of a governmental shutdown.  Would that he would voice similar compunctions for those who will suffer under the disaster known as Obamacare.  Of course that includes the babies, but given that five years ago, Catholic Charities of Richmond VA actually aided and abetted an abortion for a minor girl under their care, maybe abortion is not high on their radar screen.  What might be high on the Catholic Charities' radar screen is all that federal funding that might get crimped.  I understand that approximately 60%-80% of CC's budget comes from governmental grants.  Dare I suggest that the feds cut that funding off pronto?  There is no Constitutional mandate whatsoever for the government to be funding charities in that fashion.  Such is the responsibility of private citizens.

The federal government is such an inept mess anyway - life will go on just fine without it for a few days.
Posted by Restore-DC-Catholicism at 9:48 PM