On The Bandwagon To Attack Syria

Don't these two men have any principles whatsoever?  They are going to help plunge the United States into a
foolhardy military strike.  We have reason to suspect that it is the Syrian rebels who murdered their countrymen, not the Syrian government.  Moreover we have no clear-cut objectives, save to avenge the crossing of some "red line".  These two men are proving themselves to be an utter disaster for this country. 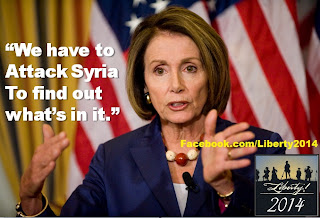 What's that?  You think I'm bashing Obama and Biden again?  Such confusion is quite understandable, but on this occasion, those two (incompetent though they are) are not the cause of my displeasure.  I speak of John Boehner, the Speaker of the House and Eric Cantor, the House Majority Leader.  They are following lock-step behind the Messiah Most Miserable.

Of course we have the usual gang of suspects lining up like mice behind that pied piper called Obama: John Kerry (who won't be tossing any medals over the fence on this occasion), John McCain, Nancy Pelosi et al.  No surprise there.  But Boehner and Cantor?  Truth be told, I anticipated the House Weeper displaying his spine of linguine but still held some vague hope that he might actually display some mettle.  Nope!  Well, come 2014, Boehner and Cantor have got to go.  They have sold their country down the river just a few times too often.
Posted by Restore-DC-Catholicism at 9:03 PM