Yes, you read that correctly!

Many of you knew that Planned Parenthood of Metropolitan DC Inc was planning to move its main location to 1225 Fourth Street NE,   A month or so ago, it closed its old 16th Street location although the new facility isn't ready for use yet.  So who is getting this new facility in NE ready so that Planned Parenthood of DC can get its baby-murder business back to "full-throttle"? 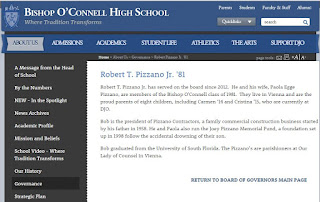 That would be Pizzano Contractors, Inc, headquartered in Alexandria, VA.  It is they who are currently constructing the murder den.  It touts itself as a "family business".  The owner/ceo is Robert Pizzano, Jr.  Yes, Pizzano is a Catholic.  Until very recently, the "partial client list" included the Diocese of Arlington.  After the diocese became aware of Pizzano's involvement with Planned Parenthood, they withdrew permission for their name to be used; for that they are to be commended.  I trust that any tentative work that the diocese may have had with Pizzano's has been cancelled.

Also note that Pizzano was, again until very recently, a member of the Board of Governors for Bishop O'Connell High School.  See the picture just above.  His name no longer appears; the administration of O'Connell is to be commended for taking that corrective action.  The picture above does identify Pizzano's parish as being Our Lady of Good Counsel in Vienna VA.  Perhaps the parish priests and other parishioners may wish to prod their fellow Catholic to break off this dalliance with baby-killers.  There might be a question as to whether or not he should present himself for Holy Communion.  He knew all along that it was Planned Parenthood with whom he was about to strike a deal.  He is building their facility in which babies will be murdered.  If that doesn't constitute "formal and material cooperation with mortal sin", what does?

Below I'll post a video showing pro-life activists protesting at the Pizzano headquarters in Alexandria.  You'll also see Pizzano himself being confronted with his sin as he is also invited to repent and make amends.  Because he is far from the camera, his face isn't clearly seen; here's his picture on the Pizzano site.

From the Pizzano site, please take note of the phone numbers and email addresses.  Contact Pizzano and ask him to get out of the contract, to not facilitate baby-murder and not to endanger his own immortal soul.

Posted by Restore-DC-Catholicism at 8:47 PM