For the last 10+ years, several of us pro-life activists have been outside the Planned Parenthood in Silver Spring MD to pray for an end to the barbarity occurring in suite 450 of 1400 Spring Street in Silver Spring MD.  We also offer real help to women going into that hell hole, aware that many feel they have no alternative due to difficult personal circumstances.  See here for some accounts of our outreaches.

We are in Silver Spring MD, a notorious nest of progressives and pro-abortion individuals.  Many of them are in the neighborhood just across the street from us.  I have written before of some acrimonious interactions between them and us.  I draw your attention to this piece.  In it I made mention of the Nazi death camps and their surrounding neighborhoods.  When the Allies invaded Germany and liberated the death camps, they forced the citizens of the neighboring towns to tour the camps and witness the carnage that they allowed to happen.  Here is an account of such an exercise.

You'll notice that an excuse that the Germans gave was "we didn't know".  Whether or not that is true we'll never know.  What we do know is that there is now no such excuse, especially when we who seek to inform are discounted and even hated for the information we bring them.  Such has been the case for the Woodside neighborhood just to our north.  It was evidenced in this incident five years ago and again today.

Some time later a man from the neighborhood approached two of our number (neither of them the owner of the car) and voiced his objections to the sign. What were his objections?  Well, it seems that he was hosting a birthday party for his child and thought it "inappropriate" for the children to see.

Let's ponder the inane silliness of what this guy was saying.  First, let's forget about objections to "those gory pictures" for none were present on her car.


So the guy finally left.  An hour or so later, one of our number noticed that the windshield had been covered over so that the sign was blocked.  Boys and girls, can we say "vandalism"?  Consider the arrogance.  The guy had his grubby paws on my friend's car, arbitrarily and erroneously deciding that her First Amendment rights were not to be respected: most likely because what her sign said pricked his guilty pro-abortion conscience.

Fortunately - for the guy - it was not anything that could not be removed.  And it was removed by the driver's husband.  Afterwards I took some pictures and now post them below. 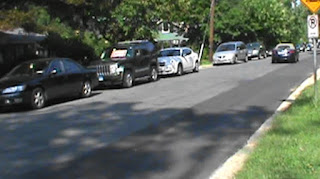 You can see that the car, with sign in front windshield, is legally parked. 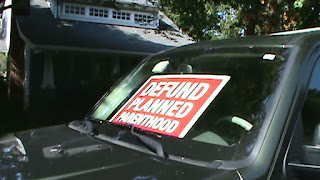 This is the sign that the guy covered over.  His act of covering the sign is legally actionable. 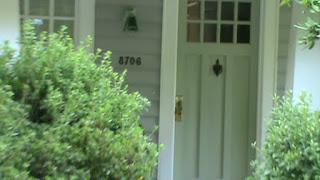 It was parked in front of 8706 2nd Avenue, Silver Spring, MD.  The man who approached the two women said the car was parked "in front of his house", so this must be where he lives.
Posted by Restore-DC-Catholicism at 4:45 PM