Fallacies Of The Isolationist Catholics

I've often wondered how Catholics who love their Faith and traditions could be caracatured as reactionary curmudgeons.  I'm beginning to understand why, thanks to some facebook discussions in which I have recently participated.

On one thread, one man stated his belief that the apostle St Paul mandated that women pray only with covered heads - both in and outside Church.  Of course we all wore head coverings when we went to Church.  However, this is the first time I ever heard it suggested, let alone mandated, that women and girls should cover their heads when they pray outside of Church, be it in the classroom, at home, anywhere.  Mind you, the first five years of my Catholic education were free from the contagions of Vatican II.  We started the school days with prayers while standing by our desks.  Of course we were all wearing the school uniform.  At no time did any teacher ever dream of telling us girls to get our beanies from our desks and put them on before praying.  Of course when we went to Church (and we went to confession and Mass every First Friday) all the girls wore their beanies.  So now where on earth did this facebook Catholic ever come up with that notion??

Another thread pertains to another discussion that has come up in various trad circles from time to time.  Here's how it started.

Catholic conservatives are a sad lot. (How's that for an opening line?) They constantly bemoan the liberal progressive forces that undermine the influence of the one true Faith, yet they themselves promote the very dogmas of modernity, such as academic and religious freedom, that are the causes of the corrosion of the Church's authority. They are like cartoon sailors on a sinking ship who furiously bail water from one part of the ship while they unwittingly pour the water into another part, fully convinced they are the ship's saviors. When you point out the futility and self-defeating nature of their well-intentioned actions, they either ignore you or bail with greater intensity. That is, they hunker down and defend the false principles that have created the leaks in the first place.

When I pointed out that the First Amendment only set limitations on what federal government may or may not do to regulate religion and speech,   Someone made the point that secular judges, without reference to the Church would set limits, etc.  Well, yes.  I didn't have the time to go into basic history, that the framers of the Declaration of Independence and the Constitution were largely Anglicans and/or deists.  I repeatedly asked them what practical alternative they'd suggest and they refused to say.  The originator of the thread had this to say:

You miss the point entirely. Any practical solution requires that one first have the correct theoretical position. Embracing a theory of practice is the problem.

Rather than rehash the dialog, I'll just post a screen shot. 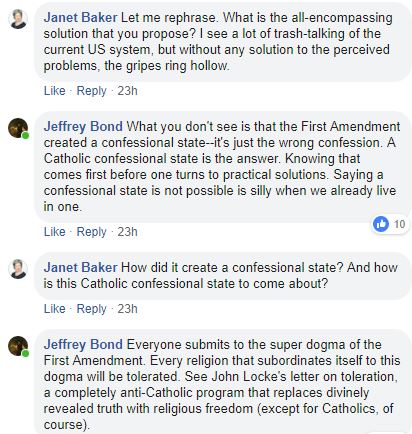 As I see it, the common definition of "religious freedom" is the ability to practice one's faith without fear of governmental reprisal.  Had that "evil" of religious freedom not been in place in our country's founding documents, then Catholics at that time would have been at great disadvantage, since Anglicanism was the creed of most of the people then.  While I agree that a Catholic confessional state would be ideal, I also acknowledge that Catholics were always a minority in this country.  I also acknowledge that a Catholic confessional state could easily devolve into a tyranical nightmare if proper checks and balances are not in place.  Catholic confessional states did exist in the past. If they were so wonderful, why did they fail and disappear?

By the way, my last question was never answered.  I don't think they have a decent answer.  It seems all they can do is sit in their little cliques and b!tch about how terrible our system of government is.

Let's look at some encyclicals that deal with the social kingship of Jesus Christ.  We can start with Quas Primas, issued by Pope Pius XI on Dec 11, 1925.  Take a look at section 14 and notice "the threefold power which is essential to lordship": law-giver, judicial, and executive.  Do they sound familiar?  They should, for they are the three branches of federal (and most states') government.  In this encyclical, I read of no disapproval of either academic nor religious freedom.

Many trads rail against the heresy of Americanism, but do they really understand it?  As I see it, Americanism was the faulty way of thinking by prelates, most notably Cardinal Gibbons, that Catholic values should have no impact on political and social life and thus were striking compromises with civil leaders regarding the same.  Pope Leo XIII never meant to condemn the civil liberties enjoyed by Catholcis; rather he condemned the squandering of these liberties by American Catholics, who used those liberties for their own gain rather than as means to further the teachings of Jesus Christ in the social realm and to save souls.

After the jump break, I'll post snapshots of another facebook debate in which I am engaging.  You can see the logical fallacies espoused by these people for yourselves.  One lady says she won't participate in the US electoral system until changes are made.  As I asked her, who does she think will be doing the changes and what changes will be done if she doesn't lend her voice to the process?  That question is never answered.  Here goes.. 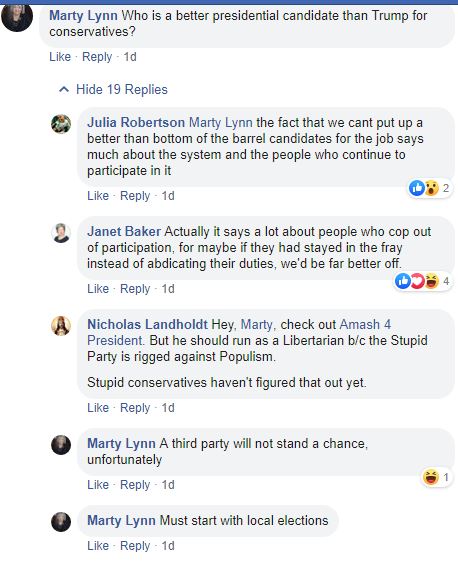 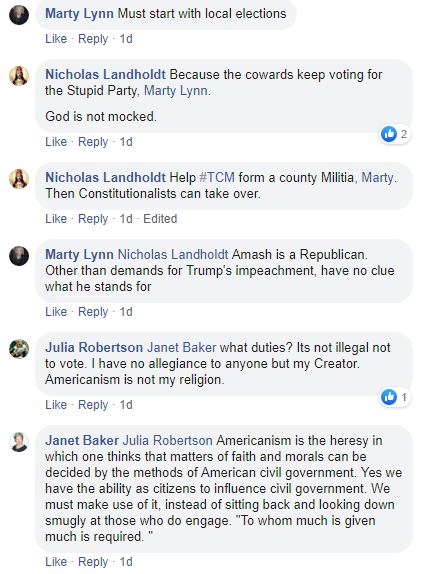 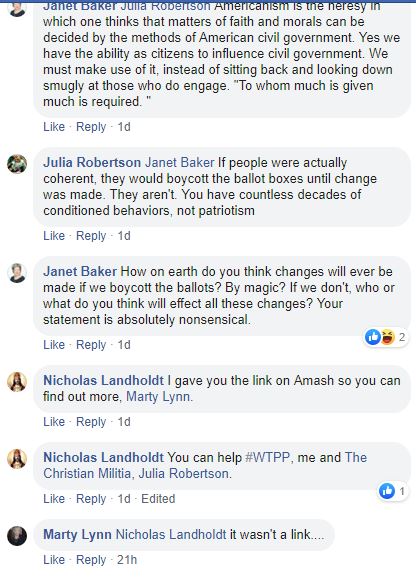 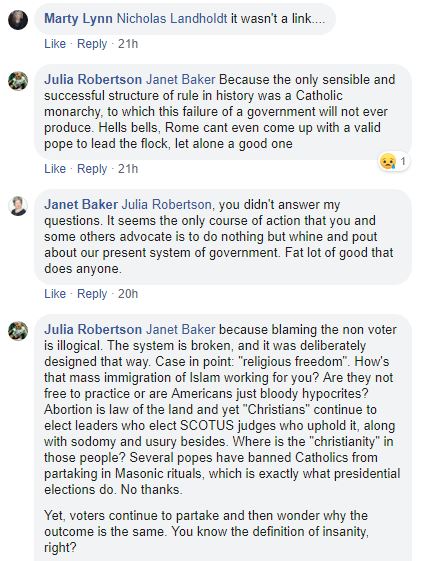 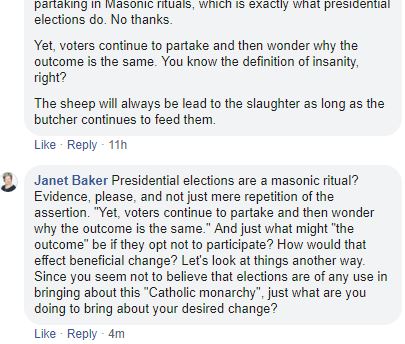 Again, Catholics have always been a minority in this country.  At one time we enjoyed a modicum of respect from a larger milieu that mostly adhered to Christian morality, but that was decades before Vatican II and the sex abuse crisis made the Church into a laughingstock.  The United States is a Constitutional Republic.  Its government will (more or less) reflect the mindset of the citizens.  If we want to see the social kingship of Jesus here, we simply must facilitate conversions to the Faith and we must utilize the civil liberties we have as American citizens.

I'm not quite sure what to call these Catholics.  Most traditional Catholics understand that while the constitutional republic that is the United States isn't perfect, no human system of government is - not even the "Catholic monarchies" for which so many of them hanker.  But I will say that the US system, warts and all, beats the alternatives.  These Catholics seem to hold themselves in isolation from civic life.  For lack of better term (and I'm open to suggestions), I'll call them isolationists, just to differentiate them from common-sense traditional Catholics.  UPDATE - We could also call them perennial curmudgeons.  They grouse and snarl more at faithful Catholics who are engaged in the political process than they do at pro-abortion and gay-pandering dissident Catholics.

Traditional Catholics will never be of any use in establishing the social kingship of Jesus by sitting in their isolated enclaves (or facebook groups) wagging their fingers at fellow faithful Catholics, many of whom might well be doing more than they to advance Christ's social kingship.
Posted by Restore-DC-Catholicism at 10:04 PM