This past week several clergy, theologians, scholars, etc released an open letter to the prelates of the Church asking them to deal with the heresies being committed by Pope Francis.  The authors of the letter understand that only bishops can take action, but that is what they ask the prelates to do.  In a word, they are asking the prelates (that is, those prelates who aren't in fact in league with the promulgation of the heresies) to act.  The text of the letter is here. 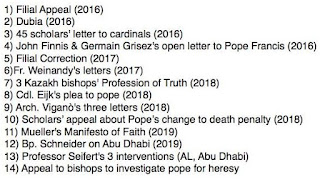 This letter is just the latest in a series of attempts.  See the list to the right.  Might this letter be, in fact, a call for an imperfect council to take action against Francis, even to the point of deposing him?  Despite denials from otherwise well-intentioned Catholics, there are reasons to doubt the validity of the papal election that seated Francis upon the papal throne.


Please read that open letter and circulated it among your families and friends.  Please pray your Rosaries and be living in a state of grace.  Below are some more words on the situation from Michael Matt.


Posted by Restore-DC-Catholicism at 8:30 PM