Mark Shriver And The Mount - Rebuked Via Picket 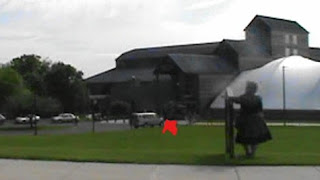 On the morning of May 11, I joined eight young men from a PA chapter of the TFP Student Action as we stood outside the Knott Arena at the Mount.  We were there to protest their honoring of pro-abortion Mark Shriver in disobedience to the USCCB statement "Catholics in Political Life".

First, let me draw your attention to the picture at the right.  This is taken from our cordoned-off location across a driveway.  The red "x" marks the location where we were originally supposed to be.  We were told by the campus police officer who guided us to the location that the officials were "afraid we might slip and fall because the previous evening's rain had dampened the grass".  Well, bless their hearts!  Wasn't that just so, so ... thoughtful of them?  That yarn was so hokey that the police officer seemed embarrassed to say it.  In the video below, I made a point to show the difference from the original location to the place where we eventually were situated.

Also observe that woman leaning against the sign.  She was no doubt assigned to babysit us as she was there the whole time we were there.  The Mount officials really must have been afraid that we might (gasp!) talk with some of the people.  Such a horrifying prospect that must have been to them!

While our opportunities for conversation were somewhat curtailed, we still made our point.  The gentlemen from TFP have done similar protests.  One of their trademarks are bagpipes.  It's rather difficult not to notice bagpipes.  Oh yes, some attendees just breezed on by us, but they knew we were there, and these signs were quite prominent. 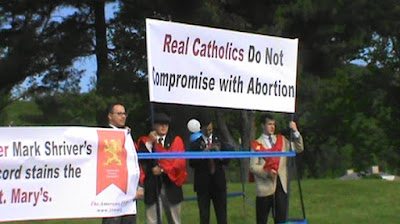 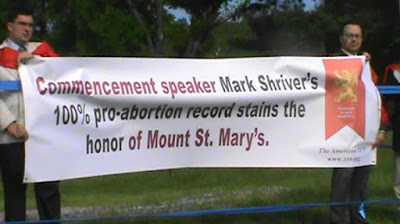 We did have some opportunity for conversation.  In the video you'll see one irate father who just didn't want to acknowledge that a pro-abort would be spouting "sweet nothings" into all their ears.  I suppose it didn't dawn on him (and many others) that quite a few who should have been graduating college that day never got the opportunity to even draw the breath of life, and that baby-murder was occurring in many Maryland localities as we were speaking, thanks in part to Shriver's abortion promotion.

However, a mother came up later to thank us for being there.  She disapproved of Shriver and affirmed our suspicions that the decision to invite Shriver caused much tension and division in the Mount community - as well it should have.

Let us pray that the leadership of Mount St Mary's never again is derelict in their responsibilities to provide Catholic example to their students and that they remember that they are Catholic first and foremost.


Posted by Restore-DC-Catholicism at 6:57 PM