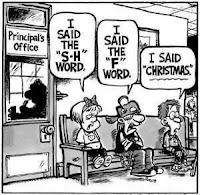 If anyone still doubts that Montgomery County MD is overrun by sourpuss liberals (after reading my many posts about life in liberal la-la land), here is a story to dispel any lingering doubts.

A few days ago three people were thrown out of a Post Office in Silver Spring MD (Aspen Hill Shopping Center location to be precise) because they had the audacity to (gasp!) sing Christmas Carols!  The post office manager, committed to his most sacred duty of banning all vestiges of Christianity (not to mention joy and happiness) immediately groused at them and summarily evicted them.  There were decent people in there who immediately booed the manager.  The article didn't name this surly manager, but one could imagine it's similar to either Grinch or Scrooge.

The Aspen Hill area is where Georgia Avenue and Connecticut Avenue intersect.  Just a few miles south on Connecticut Avenue, where that road intersects University Boulevard, is Kensington MD.  Several years ago Kensington became the laughingstock of the country when Kensington's mayor banned Santa Claus from the local Christmas parade.  After they found the parade route lined with people dressed as Santa, the mayor et al were shamed into abandoning that exercise of politically correct pettiness.

Yes, yes, I understand that the Post Office is governed by Federal regulations and not those of Montgomery County.  However, this branch does draw its staff from Montgomery County citizenry, particularly the liberals who love being good little bureaucratic lemmings.  I do understand that the Post Office is falling on hard times economically.  Given the way this nitwit manager treated decent people, it's no wonder that folks are looking for alternatives.  The USPS is contemplating the closure of quite a few locations.  I hope that the Aspen Hill location is at the top of that list.
Posted by Restore-DC-Catholicism at 10:57 PM