I wish that were mere hyperbole, but it isn't.  In my post on Jan 30th (last Thursday) I embedded a rather lengthy video.  One of the points mentioned (almost in passing) is that many - if not most - Americans (and probably others in the western world) are more in tune with sports and celebrity gossip than they are with current issues dealing with morals and public policy.  I've seen it myself in folks with whom I deal.  Simply put, this is an abysmal disgrace and is most likely sinful.  It certainly is a sin of neglect for those of us living in democracies and republics where we can influence - via our votes - the directions of our respective nations.  We will at the end of our lives, have to give a strict account to Our Lord for how we discharged our civic responsibilities.  That's correct; voting isn't merely a right but a solemn duty.  We must be awake and sober, 24/7/365, no respite.  Consider:

Today, at Metlife Stadium in New Jersey, much of this wisdom will be jettisoned.  "But it's only innocent fun", you'll say.  Is it?  Consider now that tickets are going for thousands of dollars each.  Of course for fans coming from out of town, there will be additional travel and lodging expenses.  There will be "entertainment" aplenty.  I speak not only of the drunken behavior that is so typical, but there will be much sexual immorality.  Much of that immorality will be at the expense of young girls (and boys) who have been roped into the sex trade and are quite literally being sold as sex slaves.  Yes, the Superbowl makes sex trafficking all the more prosperous for pimps and other unscrupulous vermin.  To further fuel the fire, Robin Thicke and Jay-Z will be among the "entertainers".  Both have made names for themselves with their songs (?) glorifying rape.  During the half-time show, a gay-wedding farce will be thrust in the faces of the game attendees.  I'd imagine many of them will be too drunk to recognize what's going on - and the rest simply won't give a rip!

Karl Marx once said that "religion is the opiate of the masses."  Well, Marx got that wrong (among many other thngs).  In America today, the opiates are sports, celebrity ogling, entertainment, creature comforts.  And there will be some overdosing on these opiates not only in New Jersey, but in any home where people are prostrating themselves before those Electronic Deities known as "televisions" and allowing the Superbowl proceeds to spew forth into their sponge-like brains.  I link now to an excellent article about the slop that is occurring as I type this.

Turn the TV off.  Pray a little extra on this Lord's Day.  Heaven knows we all need it. 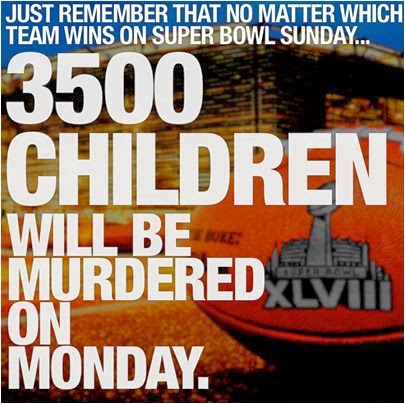 Posted by Restore-DC-Catholicism at 4:50 PM