This past Sunday I wrote what I intended to do if my parish's Holy Thursday service was marred by the washing of women's feet.  All the while of course I was praying that our parish wouldn't surrender to the temptation (I mean that word in every sense) to political correctness and false sense of "inclusion" to violate the rubrics for Holy Thursday.  Alas, I was disappointed although not the least bit surprised.  As I announced earlier, I knelt and prayed a Rosary in reparation for the violations occurring on the altar steps before our eyes.  Not my eyes, though, for I refused to give that debacle my visual attention.  Two women were up there.  One I don't know, but the other is one who (I thought) would have known better than that.  I suspect poor catechesis had a significant role to play here.

My blogging colleague Connecticut Catholic Corner has done excellent work with this, compiling many sources including this from Fifth Column.  She even posted a letter from the Vatican that confirms that Holy Thursday feet-washing is reserved for men only.  I will post it below.  I will also post an "oldie-but-goodie" from the Vortex on this matter.

Julie's post asks a good question: "Is Pope Francis a Bad Example to Catholics?"  It's a fair question.  Unfortunately with respect to Holy Thursday rubrics, the answer is an unequivocal "YES!"  I think I just saw a good portion of my parish (St John Neumann in Gaithersburg) get blind-sided, snookered and hog-tied big-time by his poor example. 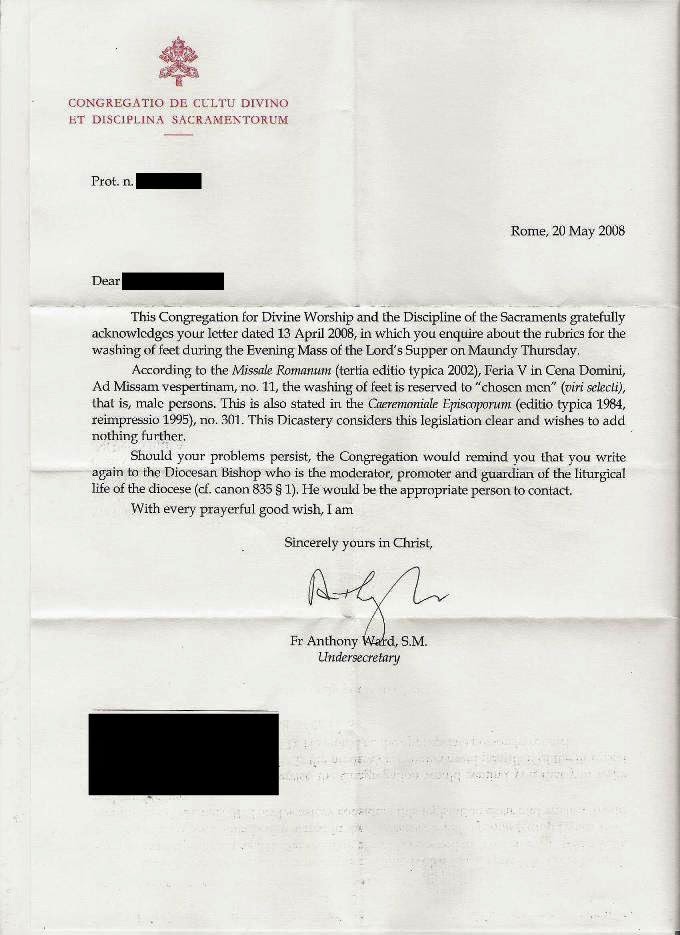 Posted by Restore-DC-Catholicism at 12:20 AM