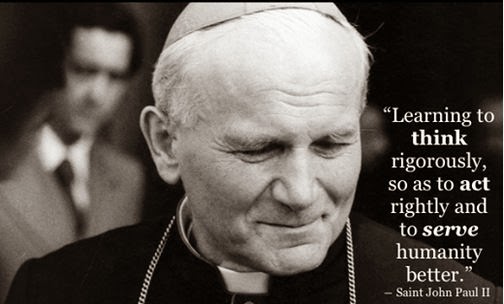 Now that some of the dust - and emotions - have (hopefully) calmed after the revelation of Father Kelly's performance two weeks ago, I think it bears revisiting.  There are underlying moral principles at play, and we cannot ignore them for the sake of maintaining a facade of peace.  A "peace" that cannot bear some rigorous examination of situations and underlying principles is not true peace.

Father Ray Kelly is the priest in Ireland who violated Mass rubrics by putting on a singing performance during a Nuptial Mass two weeks ago.  In discussions regarding his actions, I've seen undercurrents of a "situation ethics" mindset in the remarks of faithful Catholics.  I've also seen it as we've discussed the "border Mass" on April 2, done by some bishops as part of their ongoing shilling for amnesty for people in this country illegally.  Needless to say I'm greatly concerned.

Let's define "situation ethics".  In this Christian-oriented site, we see that "situation ethics" was pioneered by an Episcopal priest in the early 1900s.  He also happened to be an advocate for euthanasia and for Planned Parenthood - small wonder.  The site does an excellent job in demonstrating the logical fallacies of situation ethics.  In a nutshell, situation ethics is a notion that decision-making should be based on the particulars of a given situation and not upon fixed law (such as Mass rubrics as defined by the GIRM, the Ten Commandments, etc).

I was involved in a closed discussion during the Triduum weekend with faithful Catholics regarding the Father Kelly matter.  More than a few seemed to buy the notion that the rubrics, generated by the Roman Catholic Church, can be suspended for the sake of a "happy moment".  It was mentioned that "at least there were no dancers or clowns".  Now see the problem?  If the rubrics of Mass can be suspended at will, what's the difference between priests singing versus puppets galloping down the aisles?  Without objective principles that govern the Mass, those embellishments become a mere matter of personal taste, don't they?  Once we jettison a principle for one circumstance, it can never be invoked for another circumstance for in that first act of disregard we would have shown our own disrespect for that principle.

I've also seen "situation ethics" ethos in other discussions.  One very public discussion is on Jill Stanek's site.  Granted, Jill and many of her site assistants aren't Catholic.  I'm just appalled at how they think they're knowledgeable enough to tell Catholics what their attitudes toward Church authority should be.  Some of the commenters - Catholics - tried to explain the role of Church authority in our Mass.  But again too many Catholics were all too willing to turn a blind eye "because the song made people happy" or some other similar excuse.

I also had a Facebook discussion on the matter.  Of course there was my original post on this matter.  Take a look at those comments and you'll notice that most of those supporting Father's disobedience voice their own flippant attitudes towards the Magisterium.

I think we also saw the situation ethics mental poison at play during the "border Mass" on April 2.  Please read the link to refresh your memories about that event.  I link now to an article that explains why that was a violation of Canon Law regarding Mass.  Situation ethics has corroded even the thinking of many of our bishops.

Some might ask why I continue to harp on what they might consider "minor matters".  Folks, it's very simple.  The underlying moral principles of any situation can never be regarded as "minor".  If we refuse to examine rigorously these principles behind our thinking when it comes to so-called "minor matters", we risk crippling our ability to deal properly with matters that aren't so "minor".  I'm no expert in that regard, but I do know enough to realize the damage done when we don't attempt rigorous, thorough thinking that applies Christ's Commandments and Church law appropriately.
Posted by Restore-DC-Catholicism at 7:33 PM