We Honor Prelates by Breaking the First Commandment?

It seems that is how some folks attempted to honor Cardinal McCarrick on November 17th.  I just learned of this today when I saw this flyer in the literature rack of a church where I attended Mass today.  He was honored at an "Interfaith Concert".  When I first looked at it, I was a bit miffed that there was no Catholic group featured in this thing.  However, as I thought about it more, I realized that it was a good thing that no Catholic group was featured - because then they would have been included in this "Hindu call and response chant".  Since that is inherently an invokation of a false god, they would have been in violation of the First Commandment - "I am the Lord your God.  You shall have no other gods before Me."

Was Cardinal McCarrick ok with being "honored" by this invokation to a false god?  I don't know about this case, but I'm reminded of an incident about which I wrote on the website under "McCarrick watch" in 2005.  Go to the bottom of that page and read how he invoked Allah when some Jordanian dignitaries visited Catholic University. 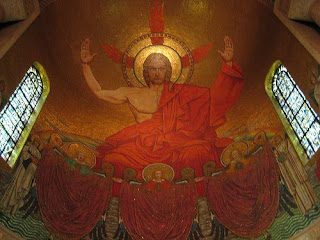 Two years ago, this annual concert was held in the main church of the Shrine of the Immaculate Conception.  I went to see if my suspicions about the mess were true; unfortunately they were.  I had to pay to get in (which I believe is a violation of Canon law, since it was held in a church).  Underneath the image of Christ in Majesty (shown above), scantily-clad Hindu dancing girls were twirling around, banging their tambourines and chanting feverishly to whatver idol they worship.  I looked up and couldn't help but wonder if the stern expression on the mosaic's face mirrored Christ's actual face at that instant.  Was the church reconsecrated after that obvious blasphemy?  At least this year no Catholic place of worship was profaned.

I've one other note.  You might notice the word "over" at the bottom.  I saw no need to waste bandwidth on this, but on the back is an acknowledgement that this concert was funded in part by the National Endowment for the Arts.  You might recall that the NEA is the institution that foisted on us, courtesy of our tax dollars, pieces of slop such as the infamous "Piss Christ" display.  Speaking of our tax dollars, why aren't the liberals moaning and kvetching about the public funding of this homage paid to Cardinal McCarrick?  Why aren't they clamoring for "separation of church and state" when they would be right to do so?

We are facing a downward spiral, spiritually and culturally, into the  pits of hell.  We will NOT pull out until our Shepherds recall who they are, Who is their God, and lead the way out.
Posted by Restore-DC-Catholicism at 10:48 PM