US Bishops Still Seduced by Obamacare

The Nov 12th issue of the Catholic Standard, on page 5, reprints an article from the so-called "Catholic News Service." It's entitled "Successful Inclusion of Abortion Ban Spells Sucess for Health Bill." Click on the link and read the thing in its entirety, nauseating though it may be. I no longer believe that the USCCB et al are simply naive. They cannot be that stupid. They truly are fixated upon establishing socialism in this country (and the rest of the world, of course).

The article lauds the inclusion of the Stupak/Pitts Amendment that was intended to bar federal funds from paying for abortion, making note that if this amendment weren't included, then the USCCB would have opposed it. Well, that's nice. However, since this amendment is included - for now - does that mean that the USCCB is behind this bill? It would seem so, for reasons that I'll explain a little later.

The article ends with a quote from Patrick Whelan, president of Catholic 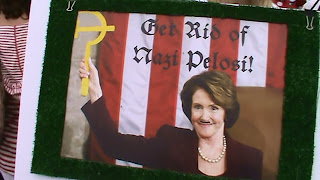 Democrats, "This reform represents progress in helping our nation to realize the Gospel imperative of making health and healing available to all Americans." Catholic Democrats! I wonder if Pope Nazi Pelosi herself is a card-carrying member of that cabal! Unfortunately Mr. Whelan is betraying his own unfortuate propensity towards letting his socialistic aspirations blind him to the reality of the machinations of the pro-abortion cabal in Congress. This Stupak/Pitts Amendment is simply a treat that disguises the arsenic of Obamacare.

Mr Whelan also advises all to follow the example of Anh "Joseph" Cao of Louisiana, the lone Republican to vote for the Obama-mess. We read in that same article that Cao is a Catholic - and a former Jesuit! Well, shades of Robert Drinan! Why, oh why, does this revelation about Mr. Cao not surprise me a bit? Mr. RINO Cao needs to receive his pink slip in 2010.

Here's why I opine that the USCCB is behind this bill. News is now coming from several sources that the bishops were VERY influential in Pelosi's decision to allow the Stupak Amendment to be brought to the floor last Saturday. Again from Catholic News Service, we read that Cardinal Francis George of Chicago, president of the USCCB, praised the passage of the bill last Saturday in the House. The article revealed that "Cardinal George had been among those in contact with members of Congress as they moved toward a vote on the legislation; for instance, he urged Speaker Nancy Pelosi, D-Calif., Nov. 6 to allow Stupak's amendment to come to the floor for a vote." Well, Cardinal George is from Chicago; he must have learned a few political tricks there.

Another bishop involved in the wheeling-and-dealing is none other than Cardinal McCarrick, former DC archbishop. We learn from Catholic Culture that Pelosi called him - not the other way around! Now what is that about???

Ladies and gentlemen, I've said it before and I'll say it again (in concert with many truly pro-life organizations and people). The Stupak/Pitts Amendment is not a victory for us. It is a doggie bone, perhaps even a narcotic to keep some naive folks mollified into swallowing socialistic poison. The very concept of socialized anything is inherently anti-life, as it cedes to civil government authority that is not rightly within the purview of the government. In this case with Obama-death-care, the feds will be given the authority who receives care and who doesn't: in other words, life-and-death authority over innocent people.

We need to disregard the seriously misguided promptings of the USCCB and the Catholic Democrats, and shove this Obama-mess down to hell from which it spawned.
Posted by Restore-DC-Catholicism at 8:25 PM