The Broadening Scope of Child-Killing 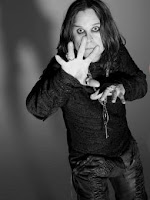 Remember back in 1973, after Roe v Wade passed, how truly intelligent people realized that the floodgates were just opened for legalized murder?  The pro-abortion wags tried to pooh-pooh our concerns, saying, "Oh, it's just the first trimester."

Comes now Ozzy Osbourne, a heavy metal rocker, who wrote a song about the very topic (inspired by a Canadian convicted of murdering his 13-year old daughter with cerebral palsy).  Get what he says.  "To put your child to death is a big decision. I'm not one to go, 'You're wrong, you shouldn't do that,' or 'You did the right thing.  I'm in the middle of the road. I question myself, thinking 'How would I deal with that?' It's a very big decision to make."

He'd better keep on questioning himself.  Some questions he ought to ask are:
"How could I have taken leave of common sense and morality?"
"Since when is murdering your child a big decision?  You simply don't murder other people!  That is not rocket science!"

The folks who mocked our concerns in 1973 knew damned well that this was just a matter of time.  This is how the culture of death proponents planned this, to allow for (not so) gradual dulling of consciences and stupifying of intellects.  As I look at Osbourne's picture to the upper right, it would appear that he is indeed a few sandwiches shy of a picnic.  By the way - I understand he has a new album coming out, entitled "Scream"; rather makes sense, doesn't it?

Ladies and gentlemen, we have a lot of work.  Do we all realize that the groundwork for Osbourne's macabre beliefs are ensconced in the current Hell Bill (the one that Sr Carol Keehan and other CINO's are so gaa-gaa over)?  It's the death panels.  We have elections coming up this November.  They are critical as we try to stop the train wreck that is even now underway in our civilization.  We must work for decent candidates and then hold their feet to the fire.  We must pray for God's mercy on our nation as never before.  Let's get going!
Posted by Restore-DC-Catholicism at 5:14 PM