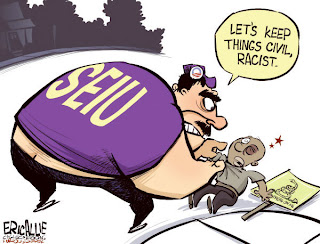 NOTE - This is a long read, but it is important that you read this to the end.  It is of particular relevance to those living in Montgomery County, MD and to those who are partaking of "social justice" projects of the Archdiocese of Washington, particularly of Just Faith.

When I downloaded the cartoon to the left, I thought it a bit farcical, although the SEIU did display some hints of anti-social behavior at some tea parties and town halls during this past year.

Silly me!  It turns out that the cartoon is really all-too-accurate in depicting the sentiments and actions of these thugs.  On May 16th, the SEIU brought 14 busloads of protestors to the home of Greg Baer, deputy general counsel for corporate law for Bank of America.  They were joined by an outfit called National Political Action that hails from Chicago (kinda makes sense, doesn't it?).  Over 500 of these individuals protested at Baer's home.

Did they confine themselves to the sidewalk?  No!  They were all over his front lawn and even went onto the front porch!  Boys and girls, can we all say "trespassing on private property"?  The only one home at the time was Baer's 14-year-old son.  Needless to say, the poor kid was frightened out of his wits.  Nina Easton is a neighbor of Baer's and a columnist.  She had much to say about the travesty.  As you read her column, take a look at the photo.  Click "read more" for more crucial details.

Below is a piece that Megyn Kelly of Fox News did on the incident.  Notice that Ms. Kelly says it happened in a Washington DC suburb.  I have reason to believe that is the Bethesda/Chevy Chase area. (Click here if you cannot see embedded video)

I'm sure more will come of this.  I live in Montgomery County, and it irks me to no end to realize that at most, Montgomery County cops didn't do didly-squat while SEIU marauded all over a citizen's lawn and terrorized his child.

What infuriates me even more, though, is the ties that the USCCB insists on maintaining with the SEIU, owing to dubious alliances, personnel in both organizations, etc.  For instance, I wrote on April 17th a piece about "Just Faith" and its dubious presence in the Archdiocese of Washington.  I noted that a member of Just Faith's board of directors was Tom Chabolla.  He's also assistant to the president of SEIU!  Now ponder this - a man who has influence in shaping "social justice" thought in this Archdiocese is in a leadership position of SEIU - the thugs who bombed onto a front lawn this past May!  Do we have a glimpse into what Chabolla might consider "social justice"?  Lovely, ain't it?

I'd ask you to review this post and this one, too.  They delve into the SEIU infiltration of the USCCB.  Remember, now.  The USCCB is being controlled by the same brown-shirt-wannabees that showed their true colors on May 16th, and are becoming more brazen as time progresses.
Posted by Restore-DC-Catholicism at 11:11 PM