The Interfaith Conference of Metropolitan Washington has put on "interfaith concerts" for many years now.  This is at best a very misguided attempt to "build dialogue" among religious faiths - even those whose tenets demand the destruction of other religions.  I speak of course of the Islamic heresy with its ruthless "jihad".  What it serves to do, in reality, is to anesthetize non-muslims to the very real dangers posed by islamic tenets. 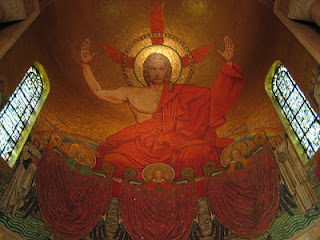 They have these concerts at various places of worship on a rotating basis.  One year the management of the Shrine of the Immaculate Conception saw fit to allow the Shrine to be desecrated by this sort of idolatry.  Let's face it; in allowing others to come in to the Shrine and worship their false idols, they committed horrible sin.  I attended that concert to see if it was as bad as I envisioned.  It was in the Upper Church and yes, it was that bad.  One number entailed half-naked Hindu dancing girls prancing and traipsing in front of the main altar to the sound of chanting and wailing and banging tambourines.  It was an atrocity.  I had enough and left.  Anyone who has been to the Shrine will recognize the picture to the right.  It is the largest mosaic of Jesus in the world, and it is immediately above the scene of the blasphemies and idolatries of that evening.  Can anyone doubt that He had a similar expression on His Face as He looked down on that evening's spectacle?

In today's parish bulletin I saw announced the next concert.  It will occur at the Washington Hebrew Congregation.  The honoree that evening will be Imam Mohamed Magid.  Who is he?  Google him.  I did.  The PJ Tattler blog put up a piece about him last July.  Among other things, Magid is president of the Islamic Society of North America.  He's a frequent White House guest (Surprise!  Not!)  He lobbied the Justice Department to criminalize criticism of Islam.  He gave an award to CAIR-Michigan executive director Dawud Walid, who just a month prior had this to say about Jews: (note - at 3:12 the English starts)


This Walid is a bit of a Jew-hater.  Listen at 13:26 when he says that Muslims have more right to Moses than do the Jews.  And keep listening as he claims that "it is a lie that the Jewish people were promised the Holy Land".  At 15:08 comes the question "who incurred the wrath of allah", guess what the answer is?

Now remember - Magid gave an award to Walid shortly after the latter uttered the screed that you just heard.  Now the Interfaith Conference is in turn giving an award to Magid?  Why on earth the Washington Hebrew Congregation is allowing this on their premises is beyond me.  If this were happening at a Catholic venue, a picket would be organized in a hurry.  If in fact some stout-hearted Jews are going to picket, let me know via a comment and I'll be happy to support your efforts.
Posted by Restore-DC-Catholicism at 3:31 PM