The Barneyfication Of The Papacy

As you might have noticed, I coined a new term "barneyfication".  Permit me to define it.  Anyone who had been in regular contact with small children about 20-25 years ago cannot help but to have made the acquaintance of Barney the Dinosaur.  He had his own show.  VHS tapes (remember those?) were flying off the shelves.  I remember babysitting my niece and nephew, then toddlers.  They danced to the Barney videos.  He is pictured at the right.  As you can see, Barney is fuzzy-wuzzy, cuddly and oh-so lovable!  Never a contrary word issued forth from his mouth.  He was the idol of youngsters everywhere.  Of course he was always affirming.  I never heard any account of him offering correction to anyone -ever.  In short, he was the "non-judgmental" idol.

Ever since Pope Francis was installed as Pontiff, we have been hearing some strange accounts and most tellingly, seeing some strange and downright silly photographs.  First, the internet went ape when a dove fluttered about him while he was giving an address.   Now birds fly around there all the time.  Some photographer simply got lucky and snapped the right shot at the right moment.  Some boring and mundane person like myself would have thought nothing of it, but  Facebook commenters and bloggers everywhere carried on and on about the "significance" of the event.  I suppose we can all be grateful that the bird didn't use that occasion to "drop a bomb", as it were, else these same bloviators would be waxing hysterical about the ill omen that the bird-turd might have signified.

Then there was the account of him zipping off in a donated vehicle, leaving his bodyguards behind (you know, the stodgy and uptight dudes who literally put their own lives on the line to protect the Pope).  I've written before   Other incidents I've mentioned here - and please follow the links backwards for more, as I don't want to rehash them all on this post. During the past week or so, we were treated to this photograph (at left), when His Holiness received a newlywed couple.  They and he donned clown noses.  Immediately all the "young at heart" waxed glowing and
eloquent, because he's "playful, free, fun" et cetera ad nauseum.

Another common comment was that he is "one of the people, just like us".  Incorrect.  The Pope is the Vicar of Christ.  That is his vocation, one that is his at all times.  The papacy (and priesthood, for that matter) is a calling, not a job where one "punches the clock and goes off-duty).  The Sacrament of Holy Orders leaves an indelible mark upon the soul of the man so ordained.  It is my understanding that not even death removes that mark.  I also understand that is why the priest always wears "clerics" (or should do so) and ideally a cassock or habit.  It's a reminder that he always  is "alter Christi" and must never, ever forget the solemn dignity of his sacerdotal orders.

Other comments approved of Pope Francis "not taking himself too seriously".  As I think about that, I realize that's a rather curious phrase, not to be taken at face value.  Now it is possible to think too highly of oneself, to be conceited and self-centered.  To combat that sort of pride (one of the capital sins), we are called to forget oneself for the service and well-being of others.  However, there is a God-given dignity that we have as His children. We must utilize all moral means to preserve, not trivialize that dignity lest we sin against the God who so bestowed it on us.  Moreover, we all have our callings in our various stations of life.  Those are to be regarded with utmost gravity.  Ladies and gentlemen, every choice we make will be factors in determining our eternal destinies, that is, whether we'll go to heaven or to hell at our respective deaths.  Quite often, they will influence the eternal destinies of others (example: parents influencing their children).  How does one "take that too seriously"?

In a saner time, not too long ago actually, we placed a high value on acting in accordance with our dignity as human beings.  We never would have thought of making buffoons of ourselves for we understood that would have been an affront to not only our dignity but those with whom we associate.  We saw that in how we dressed.  When I was a child, all the men and boys wore suits, ties and dress shoes to Mass; women were in skirts or dresses that were modestly cut.  Generally they dressed with dignity elsewhere.  Only recently did our dress become sloppy and dumbed-down, along with our language and demeanor.  And only recently did we hear the incessant clarion call to "lighten up": that is, stop thinking about what you're doing and just "go with the flow".  Like Barney.

I am not alone in noticing the spate of these "cute", "whimsical" photos.  We suspect the onslaught of these is no accident.  It sure does appear that some paparazzi's hover around His Holiness, cameras in hand, just waiting to catch him in some sort of childish pose.  Regrettably he has provided them ample opportunities to accomplish their goals (be they innocent or malevolent).

In some lively discussions about this phenomenon on Facebook, a friend of mine made some excellent points.  She pointed out that the messages and teachings that emanate from the Vatican are of the utmost importance and must be taken seriously.  How can that happen, when the chief messenger is literally being depicted as a court jester?  The Pope is the Vicar of Christ.  He is the visible head of Christ's Church, successor to Peter.  He is always "on duty".  He doesn't punch a clock and forget Whom he represents at all times.  We suspect that there are enemies of the Church who would like to see the Pope belittled, as that would greatly aid them in getting the world to disregard the teachings of the Church and the words of Our Lord.

Now here are some truly dignified pictures showing both the humanity of the Pope while honoring his singular and sublime calling.  I think most people have seen these. 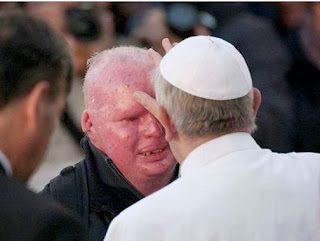 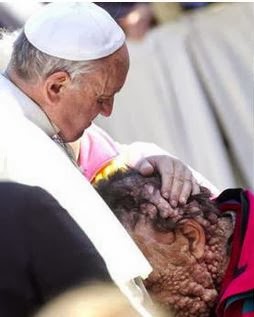 We pray that Pope Francis will take greater note of his surroundings and protect the dignity of his awesome station.  He is Christ's Vicar on earth.  Let us all pray for him.
Posted by Restore-DC-Catholicism at 11:57 PM