I'm addressing this post primarily to those who insist on either sitting out this election or voting for a 3rd-party Don Quixote because they erroneously - or perhaps stubbornly - avow the opinion that there is no difference between Mitt Romney and Barack Obama when it comes to life/morality issues.  Their refusal to look at the facts of this election - particularly Obama's past deeds - and to acknowledge the necessity of removing this man from office causes me to doubt the wisdom of these individuals.  I know others are wincing as they read this, believing that I should couch my thoughts in more delicate terms.  I respectfully disagree.  The stakes in this election are way too high; it's high time the kid gloves came off.

In addition to what I've posted previously, others on Facebook have issued statements.  Here is one from abortion-survivor Gianna Jesson. 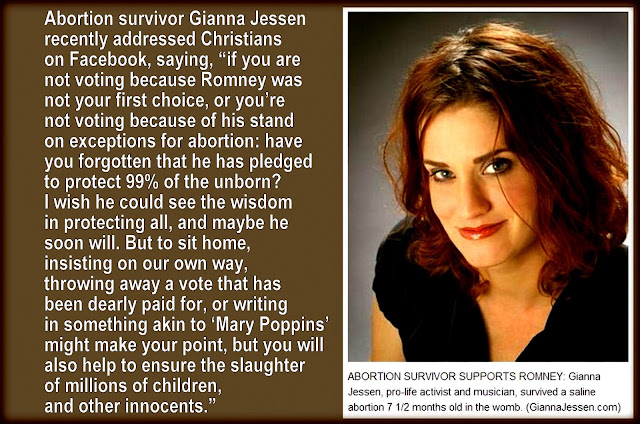 Here's one that might be a bit hard to swallow, but there's much truth in it. 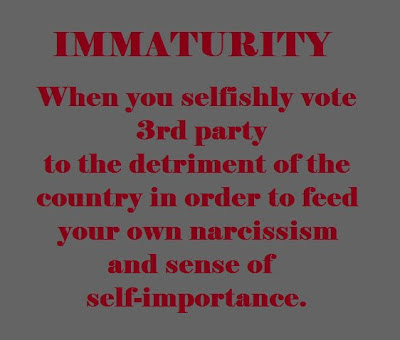 Why "selfish"?  I don't know why the creator of that graphic used that term, but in some discussions I've actually read some pretty strange things.  One person said, "my vote is about my conscience".  I can name that person.  At any rate, the statement basically says "my vote is about me and how I feel; forget the larger picture and the consequences of my actions on the country."  Is it selfishness?   Poorly formed conscience?  Some combination?  I think many folks fall into that rut.  I beg them to snap out of it, look beyond themselves and do what needs to be done November 6th to save this country.  That means vote for Romney!
Posted by Restore-DC-Catholicism at 10:03 PM