It seems that the Messiah Most Miserable is receiving campaign assistance from a most unlikely quarter.  By and large, the denizens of this quarter are very good, sincere, pro-life and Christian people.  They simply don't think Mitt Romney is worthy of their vote.  Thus they plan to either:

In previous posts (see here and here) I explained my opinion that not only is a vote for Mitt Romney morally acceptable, but also that the two options listed above, given the concrete circumstances that we currently face, would constitute objective sin. 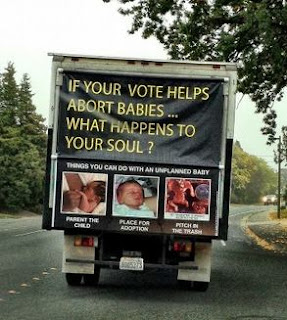 This past week I've been engaging in three Facebook discussions on this very topic.  Two of the walls are owned by Catholics, the other by a Protestant.  In all these discussions (and others) I've noticed more than a tinge of anger at the current slate of candidates.  There were plenty of rational people joining the conversations.  One lady explained very succinctly what happens when either of the two bullet-options above are chosen; it reduces the number of votes that Obama needs to win the election.  One less vote for Romney will lower the bar for Obama.  Sounds simple, right?  But some were having none of it.  On a Catholic wall, I posted the following comment to one of the stubborn purists:

Consider the mathematics of how elections work. You need to open your own eyes. I think your own ego is somehow wrapped up in this. I too would have rather had another candidate, but other voters didn't agree with me - and I suspect they didn't agree with you. So what? Are you now going to indulge a little temper tantrum, hold your breath till you turn blue? What tangible, measurable good will abstention do you or the country?

I saw something similar to that on the Protestant wall when one commenter asked what we were doing to "stop Romney".  I felt like telling him that his question might have been more reasonable and relevant last year while the primaries were still in progress.  Rather, I posted the following reply:


Stop Romney?? First things first - Stop Obama! He's much more destructive - or isn't the evidence of the last four years clear enough for you? It seems that you're among the misguided prolifers who can't get over your disappointment in the GOP primary result - so much so that your ego is involved and now you have an axe to grind against the GOP. You can't see the forest for the trees and now are devoid of any common sense regarding this election. For the love of God, sir, grow up, put your ego aside and let's work to defeat Obama. Yes, that means voting for Romney. If Obama is defeated then we can move on with pro-life legislation (which is always initiated by Congress) and holding feet to the fire.

In one of the walls (I think one of the Catholic walls) one of the purists posted a most telling remark: that the US "is overdue for its chastisement".  I really do think that some folks are so wrapped up in some understandable disappointment that their egos are invested in seeing Romney lose.  They're willing to cut off their noses to spite their faces.  Unfortunately, they would also be slicing off the noses of each and every citizen of this country - including the unborn citizens.  I posted a reply similar to the one above, to wit:

You say "we are long overdue for the chastisement". Why do you utter that in this conversation? Are you gunning for an Obama win in order to bring about this "chastisement"? If so, you are willing evil. I hope that is not the case for such willing is not morally licit.

I also posted the below on one of the Catholic walls.

I heard recently that the GOP is only throwing a few bread crumbs our way with Romney. Be that as it may, what the Dems are throwing our way with Obama is rat poison. Come November 7 (day after election) we will ingest the crumbs or we will ingest the rat poison - and we will NOT abstain from doing so, for the election will be over. All these 3rd party schticks are pie-in-the-sky pipe dreams. If you do nothing to stop Obama, namely vote for Romney, you will be morally culpable for the sin - yes SIN - of not acting in a realistic way to restrain Obama.

Ladies and gentlemen, we must exercise prudence.  We don't have the ideal slate of candidates in front of us.  So what?  For now, take your sense of anger and disgust and mortify it.  Logic and common sense, not "gut" nor "heart", must guide our election decisions.  If God blesses us with Obama's defeat, then let's work and pray to bring about a Culture of Life.
Posted by Restore-DC-Catholicism at 10:51 PM