Vote Obama! For "Your Lady Parts"!

Remember how the 1960s feminists railed against being seen as "sex objects"?  They were the quintessential useful idiots who were used by progressive puppeteers.  The altruistic and idealistic veneer of these progressives is beginning to crack.  Rather, these progressives are simply dropping all pretenses of being concerned for "women's issues".  The first hint should have been the promotion of baby-murder, which was decried by original suffragettes such as Susan B. Anthony and Elizabeth Cady Stanton.  Then there is the deplorable silence by these same progressives in the face of the brutality suffered by women who live in muslim-controlled areas of the world.

Obama and his Minions Most Mindless are no different.  Plumbing new depths of incivility and tastelessness (and obviously taking cues from Code Pink), the Obama campaign put this charming little e-card on its Tumbir site.. 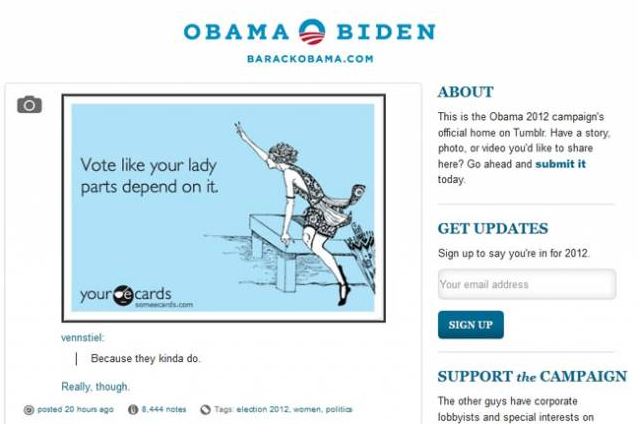 Now isn't that just, well, special?  You won't find it on that site now.  They pulled it down after Rush Limbaugh called attention to it and gave it some much-deserved ridicule.

This ad is both condescending and imbecilic.  It is an indication of just what they think of the citizens of this country and shows why Obama et al do not deserve to inhabit the White House.  They never did.  Let's vote him out this November.
Posted by Restore-DC-Catholicism at 9:52 PM