Besides the all-important presidential election, there are a number of crucial matters that are specific to the State of Maryland.  Among these are four "general referendum" questions.  I will deal with these in the order in which they'll appear on our ballot.  This post will deal with Question 4 - the DREAM Act.

As you know (even if you may not accept it), there are a number of matters in this election that deal with intrinsic morality (abortion, homosexual relations, etc).  A Catholic who takes his/her faith seriously, indeed the salvation of his/her soul, will never deviate from the Church's teachings on these matters.  There are other issues that are within the realm of prudential judgment.  Economic issues are an example.  While we adhere to Christ's teaching to care for the poor, good people can and often do disagree on the proper means to do so.  It is even permissible to have such disagreements with Church structures on these matters.

Question 4 is one such matter where intrinsic morality is not in question.  Many good Catholics believe that the DREAM Act is seriously, even fatally flawed.  I myself hold that opinion.  Indeed, I believe this is one example of how the progressive elements in Church bureaucracies can ensnare themselves in imprudent alliances and actions.

Because this is a lengthy and thorough analysis,...


Below is a flyer that is being distributed in Maryland parishes.  Please study it. 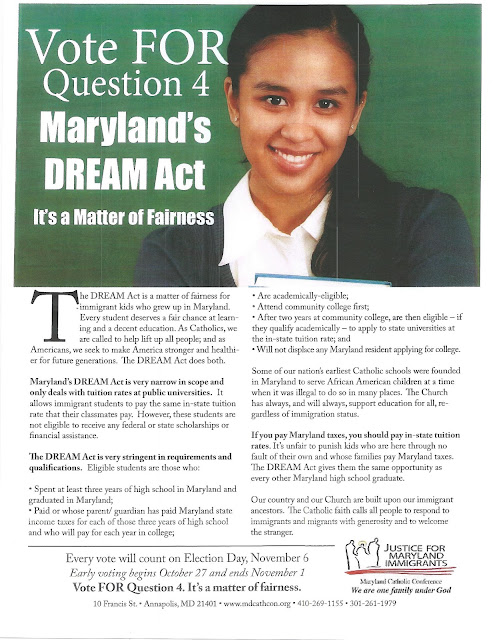 This flyer is extremely flawed - perhaps even dishonest.  The DREAM Act was passed so that children of immigrants who are here in deliberate violation of immigration law could receive education at the expense of Maryland taxpayers - and at the expense of immigrants who have complied with immigration law.  You will not find the word "illegal" in this flyer; you won't even find the word "undocumented" (the politically-correct term for illegal immigrant).  For instance, take the sentence "it allows immigrant students to pay the same in-state tuition that their classmates pay".  Of course young people here legally can already do that, but this detail isn't mentioned.  Then we see "will not displace any Maryland resident applying for college".  That's nonsensical on its face.  Of course it will as there are only finite numbers of seats in the classes.

Look at the second paragraph in the right column.  It tries to draw a parallel between children of illegal aliens and African American children.  This is "apples versus oranges" in two key respects.  First, the African Americans did not come here on their own accord.  They were forcibly brought here as slaves.  They broke no laws in coming here (in fact, laws were broken in dragging them here).  Secondly, notice that it was the Catholic Church that educated these children.  There was no attempt to coerce other citizens, via taxes, to educate the children.  There simply is no parallel between the two scenarios.

The next paragraph says "it's unfair to punish kids who are here through no fault of their own".  The opponents of the DREAM Act do not seek to "punish kids" and it's unethical for the Maryland Catholic Conference and its partners to so demonize us.  There is a world of difference between "punishing" and not rewarding criminal behavior.  The DREAM Act will have the effect of rewarding the criminal behavior of their parents at the expense (via taxes) of all of Maryland's taxpayers.  Yes, one can argue that the children are not responsible for the crimes of their parents.  But it is also clear that by the time the children are ready to attend college, they themselves are adults and should be responsible enough to rectify their own legal status before they can enjoy the benefits attendant with legal residence.

Addendum: After I published this, a friend pointed out some things to me privately.  If an alien is here illegally, he/she most likely doesn't have the documents required to work here legally - including a valid social security number.  Yet the flyer claims, "if you pay Maryland taxes, you should pay in-state tuition rates".  If these illegals don't have social security numbers, how are they paying taxes?  How are they filing the income tax returns to prove they qualify for in-state rates?  If they're paying income taxes, are they using fraudulently-obtained social security numbers to do so?  Why aren't these questions being addressed by the Maryland Catholic Conference?  Last time I checked, the 8th Commandment forbids this sort of thing.  Moreover, it seems to me that the usage of fake social security numbers falls within the definition of mortal sin.  Why isn't this being addressed from the pulpit?  (end addendum)

At the top, the flyer says "it's a matter of fairness"; in reality, it's "anything but"!

So much for the flyer itself.  As I alluded at the beginning of this post, the progressives in the church bureaucracies are disturbingly adept at embroiling the Church in all sorts of squalid associations - such as Justice for Immigrants (of which Justice for Maryland Immigrants is just a local chapter).  Let's take a look at the other organizations that comprise "Justice for Immigrants".   There's a saying that "if you lie down with dogs, you get up with fleas".  Well, there's going to be lots of scratching and itching with this crowd.  It's quite the "who's who" of all the progressives/dissidents that claim to be Catholic.  I'll highlight a few of them below; their names will be hyperlinked to posts I've done on these previously.


There are more, but you get the idea.  In addition to learning more of these progressives, I'd also suggest that you read of the Cloward-Piven Strategy and I think you'll see how the DREAM Act fits right into this Alinskyan model of destabilizing society.

Marylanders!  Please vote NO on Question 4.
Posted by Restore-DC-Catholicism at 10:23 PM