Why Are Many Episcopalians Becoming Catholic?

We've all seen several accounts of Episcopalians becoming Catholic - sometimes as entire parishes.  See here and here.  In these situations the people have said that the left-wing leaning nonsense of the Episcopalian hierarchy was becoming too much to stomach.  Mind you, this is the denomination that originated because Henry VIII of England wanted to divorce his wife and that opened the floodgates of contraception and abortion with its abysmal capitulation in its 1930 Lambeth Conference.

Some of that lunacy is apparent locally.  Take, for instance, St Luke's Episcopal Church in Bethesda MD.  It is at the intersection of Old Georgetown and Grosvenor.  What do they put forth as their image to anyone driving on those roads?  How's this for an example? 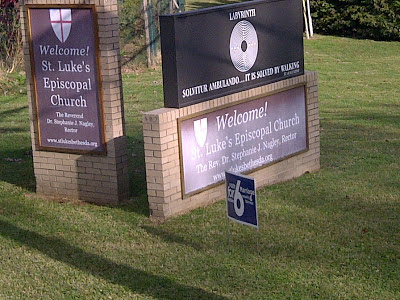 This is what folks driving north on Old Georgetown Rd see.  Of course they have a labyrinth; how helpful when goofy doctrine has one literally wandering in circles.  But notice that little blue yard sign towards the bottom.  It is a sign urging voters to vote "yes" on Question 6 on Maryland's general ballot.  That means that Maryland's Episcopal congregations are acting to facilitate perverted lifestyles at the expense of the God-given institution of marriage. 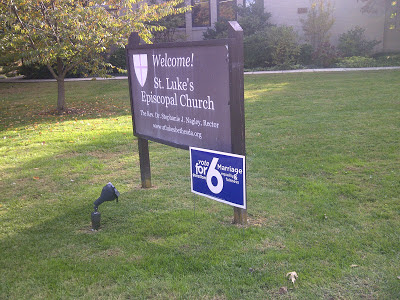 Lest anyone think that some "champion of marriage equality" plopped that sign in front of the church sign without proper authorization, here's another one by the Grosvenor entrance to the church.  Even if both of them were unauthorized, then why would not church personnel have removed them?

Holy Mother Church has her problems, to be sure.  But she still retains the Sacraments and Christ's teaching authority.  Many good Protestants, seeing the slop occurring in their churches, are coming home to Rome.

Posted by Restore-DC-Catholicism at 9:26 PM