I Really Hate To Poop A Pro-Life Party, But..

I'm aghast at what I've been seeing over the past two days.  The blogs, web sites and facebook pages of pro-lifers have been filled with accounts of newborn twins clinging to each other in a neo-natal bath (I suppose that's what it is).  LifeSiteNews has details on it, with video.  Apparently this partial submersion in water is to aid the just-born infants in their transitions from life in the womb to life outside the womb.  These little ones were so bathed and were clinging to each other as they most likely were prior to birth.  All the viewers are touched by how they're clinging to each other.

The trouble is they're so transfixed they cannot see the danger.  When I've mentioned it, I was poo-pooed.  But watch the video and read the LifeSiteNews account carefully.  Both babies are being almost completely submerged - by one nurse.  That's right - one nurse between the two of them.  She has only one hand to devote to each child.  As most folks know, babies squirm!  And these particular babies are wet, to boot!  It only takes a few seconds for tragedy to happen!  What were these people thinking?  Maybe I should ask "were they thinking at all?"  Were they so eager for a "touching beautiful moment" that they were willing to suspend caution and common sense?

This happened in France.  I cannot imagine this happening in an American hospital without that nurse being tossed out on her hiney and perhaps being stripped of her license.  I love babies. For that reason I deplore the dangerous situation in which these little ones were placed. 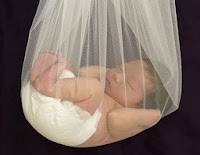 This, however, is not the first time I've seen newborns treated like gazingstocks at the expense of their comfort, dignity and safety.  About 10 years ago, I started seeing pictures like the one on the right.  Actually, this one is more benign than some of the others.  At least this child is wearing a diaper.  I recall seeing the babies suspended in fishnet baskets without one stitch of clothing between them and the netting.  In other words, they were treated like a sack of potatoes or onions - so that we could all have "cute-attacks". By the way - this particular picture was NOT a "photoshop" job.  He/she really was suspended in the air. I trust that there was a mattress underneath this babe in case the rope at the top became undone.

I'm not sure what caused so many folks not to recognize the danger to those twins.  Peer pressure, perhaps?  Someone saying, "How lovely!" caused them to "jump on the bandwagon"?  Not reassuring!

Posted by Restore-DC-Catholicism at 11:24 PM