We've been inundated by sad tales of Lois Lerner's hard drive crashing, causing all of her emails to be lost.  Poor thing!  Fortunately there are these things called servers - you know, the main computers that govern an entity's data system - and emails?  Did that crash too?  Now we hear that they've had to shell out $50k to the National Organization for Marriage for divulging their tax returns to the Human Rights Campaign.

Just a few days ago we learned that the Environmental Protection Agency cannot even protect the environment within its own walls.  It seems that the Civil Service Exam is failing to screen prospective applicants for requisite potty-training knowledge.  Its employees are defecating in its hallways.  I wish that was a joke.

So there you have it, ladies and gentlemen!  Your tax dollars at work - working against you, that is.  And I myself came across my own example.  From the United States Census Bureau I received in the mail today (that is, June 26) my 2014 Census Test.  Below is the "letter" that came with it. 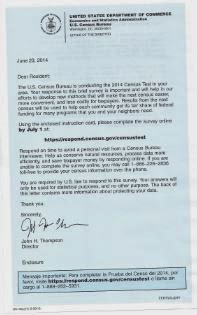 Notice that I was asked to complete this thing by July 1.  Below the website address it reads, "respond on time to avoid a personal visit from a Census Bureau interviewer."  Oh, goody!  I was given 5 days to respond before I could expect an "interviewer" - accompanied by how many swat-team staff, dare I ask?  How fortunate that I did not choose this time to go on summer vacation; else I might have come home to find some jack-boot "interviewers" ready to accost me on my return.  But do bear in mind the July 1st deadline as I continue.

There were a number of questions that were rather inane, based upon this July 1st deadline.  I copied some and will post (with my identifying information redacted).  Observe. 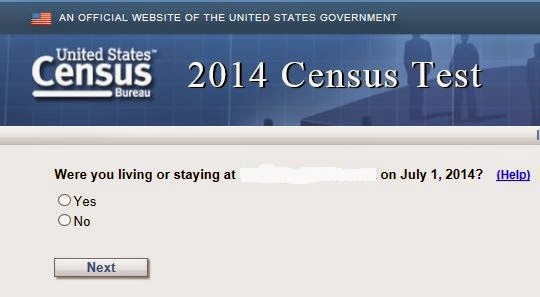 So the folks at the Census Bureau don't understand the proper usage of time in relation to language and communication.  Again, our tax dollars are being wasted.  But perhaps I should look on the bright side.  All indications are (so far) that the Census folks are at least potty-trained.