Why Did Catholic Groups Attend The March To Perdition?

Yesterday I commented on the "pussy hat" that many deluded women wore to the Women's March.  It turns out that the hat was somewhat innocuous compared to some of the get-up that many women wore.  To wit: 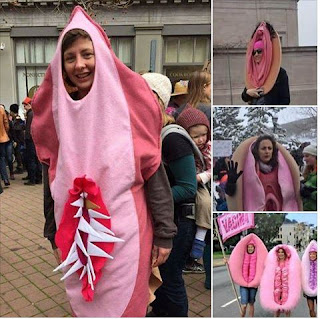 As I said yesterday, this is a far cry from what I remember the feminist movement of the 1960s to be.  Can anyone believe that Susan Anthony, Elizabeth Stanton or any of the other earlier pioneers would have approved of this nonsense?

These gals claim that they want to be respected.  Respected for what?  There is a degree to which respect must be earned.  As you can see, many - maybe most of the women in attendance dressed and acted in ways demonstrating that they have no sense of dignity as human beings, let alone women. 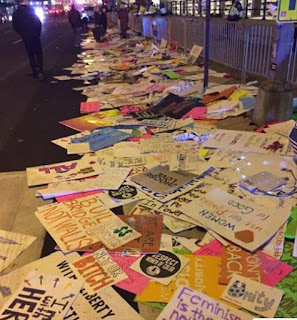 The presence of Soros influence and cash might be a reason why a pro-life women's organization was given the heave-ho.  Initially they were permitted to be a partner, but after some very nasty tweets (and perhaps other financially-based incentives), their status was rescinded.  I will now link to a Church Militant piece on the matter.  Embedded in that article is an interview with the president of that pro-life organization.

Now I will broach another troubling aspect of yesterday's March to Perdition.  These days, it seems that these affairs are never quite complete without some dissident Catholics literally selling their souls by striking hands with demonic forces.  Two Catholic institutions of higher learning (?) sent busloads of their students to the march in Minnesota.  I thought these schools were supposed to be forming the hearts and minds of students so that they would follow Christ and His Church, helping them towards eternal salvation.  Yesterday these schools sacrificed the souls of their students on the idolatrous altar of political correctness.  In Chicago, a bunch of Franciscans joined the perverts and pro-aborts in their revelry.  I embed a tweet from one of their Franciscan buddies.  He denies supporting abortion.  Well, be that as it may, they all gave aid and comfort to pro-aborts.  Even if they were initially unaware of the nature of the event, they were duty-bound to leave as soon as they did become aware.  Since these perverts were so brazen in their conduct, the Franciscans could not have remained oblivious for long.  They simply didn't care.  Now the tweet.

Many, including me, rebuked them in comments.  I'd suggest all readers do the same.
Posted by Restore-DC-Catholicism at 10:22 PM