When I wrote yesterday's post, I omitted an important connection between religious-star-wannabees and perversion.  That common thread is narcissism.  If you look at the links that I embedded in that article, narcissism reeks throughout.   Speaking of which, I learned of this official portrait of the pope. 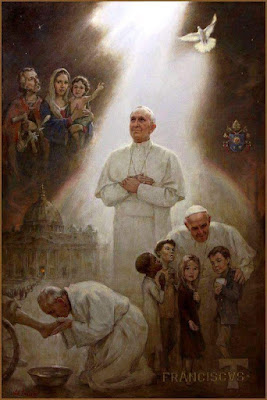 Notice how he's standing in the light, in the center of the thing, while the Holy Family is shoved into a corner, partially obscured by shadows?  And why are his hands folded in a manner that hides his pectoral cross?  I also can't help but notice the rainbow; is that a nod to the cabal that seems to control the Vatican?

Now for another more glaring instance of the narcissism found in dissidents, I just became aware through LifeSiteNews that the pastor of St. Francis Xavier in Manhattan has been removed due to "boundary violations" with an "adult male who attended the parish".  The pervert's name is Father Bob VerEecke, S.J.  The acting pastor claims there was "nothing criminal", just "lack of good judgment".  This acting pastor's name is Father Daniel Corrou.  Given his dismissive platitude, I am none too confident in Corrou's fitness for his new position.

I've written plenty about that parish over the years, given their coddling of gays.  Now it turns out that the pastor is himself gay.  Is he also a narcissist?  Go back to the LifeSiteNews article and watch the video to see how he profaned Pentecost Mass in 2017.  By the way - should that video "disappear", please notify me via comments for I took the precaution to download that evidence of corruption.
Posted by Restore-DC-Catholicism at 12:00 AM