Homosexualists Attempt To Shut Us Up

From the attempt to control our conversations at my parish last week to Cardinal Wuerl's failed attempt to spin his yarn at Annunciation last week, we see attempts to stifle the voices of faithful Catholics who are tired of debauchery in the highest levels of the Church.  I just mentioned local instances.

At his Mass on Monday, the pope tried to get us to resign ourselves to "silence and prayer".  The entire homily is here.  Notice the none-too-subtle swipes he takes against faithful Catholics: "people who do not have good will", "people who seek only scandal", etc.  I suppose these could be added to the Little Book Of Insults.  But if he's truly convinced that "silence is golden", might I suggest a little leadership by example?  For starters, he can stop uttering bloopers about "the emergency of plastics littering the oceans".  He also tossed in some shilling for open borders.

Good ole' Cardinal Cupich certainly got his talking points right, didn't he?  In his "rabbit hole" interview, he flat out said that the environment and immigration was more important than the victimization of countless boys at the hands of perverted clergy. 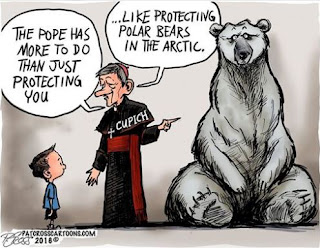 But somewhere along progressive communications lines, the talking points became a bit garbled.  A few days ago, a USCCB official informed Catholics everywhere of the latest update to Christ's Great Commission.  He said that "the struggle of working people...is the Gospel, pure and simple"!  Of course that's rank heresy, as the Church's first mission, given by Christ, is the salvation of souls.  But isn't it telling, though, how the progressives are throwing out every worn-out canard to distract us from the moral rot in the Church, starting at the papacy?  They might have a fleeting chance at being believable if they could coordinate among themselves what heresy they're going to promote this week.

So such are their pathetic attempts to get us to shut up.  For the most part, they are almost comical.  Almost, I said, for the latest attempt aimed at Archbishop Vigano is nothing short of sinister.  The pope is consulting with Cardinal Coccopalmerio (aka Cocaine Cocco) and canon lawyers to explore canonical penalties against Vigano.  Cocaine Cocco is one of the prelates implicated in Vigano's testimony, so I wouldn't be surprised if he has some axes to grind.  I'm looking at the Rorate Caeli account of this and its analysis.  Canon law cannot be wielded at whim against anyone without canonical crimes being committed, and these would entail the commission of sin.  Of what sin could they accuse Vigano?  The fact that the pope et al are even trying is telling both of their fear of discovery and their vindictiveness against those who shine the light on their evil.

I saw a comment on another site that pointed out that if the pope actually does sanction Vigano, then he'll just further enrage faithful Catholics who have already had enough.  Is he foolish enough to try it?  Your guess is as good as mine.
Posted by Restore-DC-Catholicism at 11:54 PM