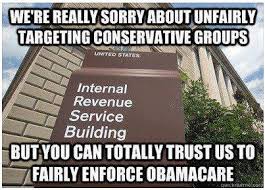 audit by the Internal Revenue Service after penning a number of articles critical of the Messiah Most Miserable.  The full Blaze article can be found here.

Although she made no profit from her writing ventures, the IRS demanded to know who paid her.  Moreover, they called her to their office and insisted that she come alone.

It should be noted that she not only criticized Obama in her articles, but also some notoriously left-wing "katholyc" groups, such as "Catholics in Alliance for the Common Good" and "Catholics United".  Hendershott exposed their financial ties to George Soros just a few months prior to the IRS harassment.

Moral of the story - if you criticize the Messiah Most Miserable or even just the Minions Most Mindless, you might get a rap at your door or a phone call.  We trust that they will be so decent as to do so only during waking hours.

However, in all fairness to the Man-Child of the White House, the IRS has been doing such strong-arming long before he was born (wherever that was).  It appears that FDR got them started on their wicked ways and many Dems - and at least one Republican - made use of their arm-twisting tricks.  A Wall Street Journal piece has a decent summary of the IRS's chequered career.

By the way - the Treasury Inspector General's office released its report on the matter.  Go here and download a pdf copy to your own computers.
Posted by Restore-DC-Catholicism at 10:15 PM