On Wed Aug 29, starting at 7pm, St John Neumann in Gaithersburg MD (my parish) conducted an evening of prayer for the victims of the clergy sex abuse.  It was quite well-attended.  It was valuable if only for the exposition of the Blessed Sacrament, Rosary and Benediction.   It started out with the exposition and a Gospel reading.  After a short prayer, we were invited to adjourn to the parish center for the meeting. 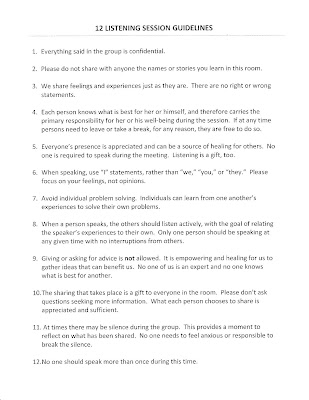 When we got there, the chairs were arranged in circles with approximately 10 chairs in each circle.  We just picked a circle and sat down.  Each circle had a moderator who kept notes of general things said (without names or other identifying details).  Before discussions began, the moderators passed out sheets listing "12 listening session guidelines".  One is reproduced to the right.   You might have to open this in its own window to read it, since it is small on the screen.

Most of the guidelines are decent enough, with respect to confidentiality and not being overly probing.  But others raise red flags.  Look at number 3: "There are no right or wrong statements."  That's simply false.  If someone were to have said that "homosexual relations are fine with the Church", we were supposed to let that ride?  That did not happen in my group so happily I didn't have to confront that bogus guideline.

Guideline 6 is one with which I took strong issue in my circle.  "Focus on feelings, not opinions".  Two big things are very wrong with that, and the mindsets that they seem inculcate.  First, we have the emphasis of feelings over opinions, that is, emotions over thoughts.  Ladies and gentlemen, our society is increasingly becoming one that judges morality and situations by the emotional reverberations that they make on some people, as opposed to their objective merit.  Even at that, the emotions of some (politically correct classes like gays or minorities) are valued over others.  That is why we have the spectacles of some people being punished at law because their words seem offensive to others, regardless of the truth behind them.  Our society values emotions over objective merit because it no longer believes in any objective truth.  At the root of that rejection of objective truth is rejection of God Himself.

We also see in that "guideline" a put-down of thoughts and opinions that people might have regarding the scandals.  As we were leaving, a group of us agreed that this guideline may have been an attempt to squelch real thought and conversation about the events of the past few weeks.

One point I made about this in the circle is that a "focus on feelings" would have as an immediate effect a paralysis, for if one turns in on one's own feelings and focuses on them, he/she will not be able to engage in actions that will be appropriate to the crisis that we face.  Whether or not that was the intent of the writers of these guidelines, I have no way of knowing.  However, they should have seen that would be a consequence of their suggestion.

I also made the point that our parish had a foretaste of this current scandal a little over six years ago, when our parish curate, Father Marcel Guarnizo, was thrown under the bus (yes, I used that phrase) for withholding Holy Communion from a flagrant lesbian.  I gave a brief background as some in the group were relatively new to the parish and weren't informed about that debacle.


Posted by Restore-DC-Catholicism at 11:19 PM