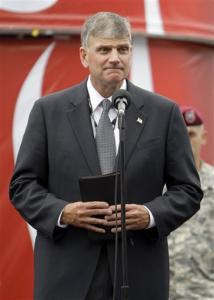 The United States Army has disgraced itself by pandering to the politically correct elite, and has disinvited Franklin Graham from the Pentagon Prayer Day.  The Army said that Franklin's comments about Islam were "inappropriate".

Franklin Graham simply told the truth.  Truth, by nature, pays no obeisance to "inclusiveness".  If the Army is spouting this blather, they may as well call off the "war on terror", as they are now blinding themselves willingly to the terrorists.

Why, oh why, do I think the reputed Commander in Chief brought pressure to bear???
Posted by Restore-DC-Catholicism at 12:01 AM