Just Say No To CCHD

My archdiocese (of Washington) had their CCHD collection last August.  They tried to camouflage it by calling it "Communications and Human Development" but I don't think they're fooling too many people anymore - if they ever really did.

The majority of US dioceses still retain the November date as their CCHD collection.  Over the years many of us have pointed out that the CCHD collection funnels Catholic dollars into organizations that foment the Culture of Death.  I join my Catholic Media Coalition colleagues in saying #no2cchd.  Here is a press release from CMC president Mary Ann Kreitzer.  Read below that for an additional comment of mine.

Most Catholic dioceses around the country will take up the Catholic Campaign for Human Development (CCHD) collection later this month. CCHD professes to assist the poor, not by direct charity, but by developing projects that enable the poor to help themselves. While CCHD uses development grants to promote the collection, the bulk of donations goes to community organizing groups that agitate for a leftist agenda in direct conflict with Catholic teachings. Over the years controversy about CCHD has continued unabated because of this reality and the bishops' failure to institute change. Many Catholics will remember the millions of dollars funneled to ACORN before its scandalous activities leading to the mortgage and bank collapse were exposed. Several times, CCHD has pledged to reform, but, despite short-term improvements, its direction remains unchanged. Abuses continue and, according to Stephanie Block, an expert on Alinskyian organizing, CCHD, under the guise of "charity," channels money solicited from the faithful into groups that promote abortion, contraception, homosexual activism, socialist economic policies, etc.

In a recent report Block wrote:
In fact, 50% of the 2013-2014 CCHD grants have been given to Alinskyian organizations! This doesn’t include an additional award of $300,000 to one of the Alinskyian networks at its national level, nor $500,000 to the Society of St. Vincent de Paul to restructure its approach to include community organizing and political advocacy, and $500,000 to the California Catholic Conference which has been forced to battle U.S. Department of Health and Human Services (HHS) mandates that would force Catholic institutions to purchase health insurance that covers abortion. This latter would be a positive development if it weren’t for all the millions of dollars CCHD poured into California Alinskyian organizations to “advocate” for universal health care legislation regardless of any “reproductive justice” components.

Block reaches this conclusion:
For forty-four years [CCHD has] shamelessly pushed aside any corrective reform efforts, expanding its Alinskyian networks into more cities and exporting the twisted theology of Alinskyian organizing into other countries.
So, no, the CCHD hasn’t reformed, not even a little…and it doesn’t intend to reform.
Catholic Media Coalition and its individual member groups urge Catholics in the pew to "Just say NO!" to the CCHD collection this month. Give your hard-earned money to groups that really serve the poor.

I'd only add one thing.  Let the church know why you won't give them money.  You might wish to use the note below or write something of your own.  Please give that money to a truly worthwhile charity.  Say #no2cchd. 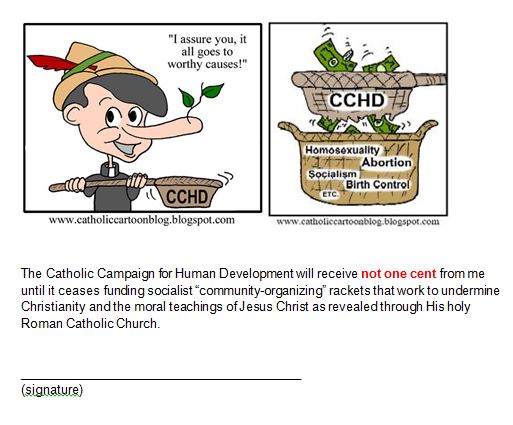 Posted by Restore-DC-Catholicism at 7:50 PM