From The Ecumenicide Department - Is The Vatican Trying To Thrust On Us A One-World Religion Of Humanism?

I don't know what else to make of recent events.  Last summer the Holy Father proposed a 10-point plan for happiness: a plan that didn't once mention the word "God".  The SinNod that happened last October bore evidence of high church officials trying to compromise the Church's moral teachings regarding sexuality, marriage and family life.  He urged protestant Tony Palmer not to convert to Catholicism when the latter expressed that desire.  On Pentecost Sunday the Holy Father allowed a Muslim to utter idolatrous islamic "prayer" in the Vatican Gardens. 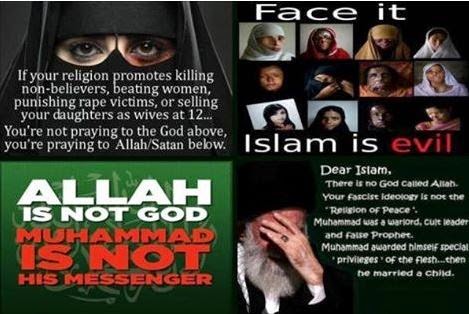 Today, during his visit to Turkey, Pope Francis went to the Blue Mosque and prayed in it with the Grand Mufti and did so while facing Mecca.  He then asked the Mufti to pray for him.  Knowing that the Mufti would do obeisance to a false idol, what benefit did he think he'd acquire from such idol worship?  Has he been listening too much to Cardinal McCarrick?  It is said that he wants "dialogue" to combat "fanaticism and fundamentalism".  Can he really be that naive?  Once again, the Church is about the business of saving souls, not combating "fanaticism and fundamentalism".  That means proclaiming the Gospel and the teachings of the Church, not praying to false idols.

In 1928 Pope Pius XI released his encyclical Mortalium Animos.  In it Pope Pius wrote about religious unity and the fact that true unity can only be obtained when the world converts to the one truth Roman Catholic Faith.  Until then, no Catholic is to engage in any pretense of a premature unity.  In that encyclical, it is clear that Pope Pius is condemning false unity with protestants.  These words still bind on us.  If they bind on us with regards to protestants, how much more do they do so with regards to those whose very quaran evinces hatred of Christians?

I for one look upon this incident in the Blue Mosque with much regret.
Posted by Restore-DC-Catholicism at 9:07 PM