When I went to a weekday Mass at the Shrine of the Most Blessed Sacrament in DC during last week, I saw their Aug 5 bulletin and an item caught my eye.  It's a letter from the relatively new pastor, Father Bill Foley, addressing the congregation about the McCarrick mess.  Here it is. 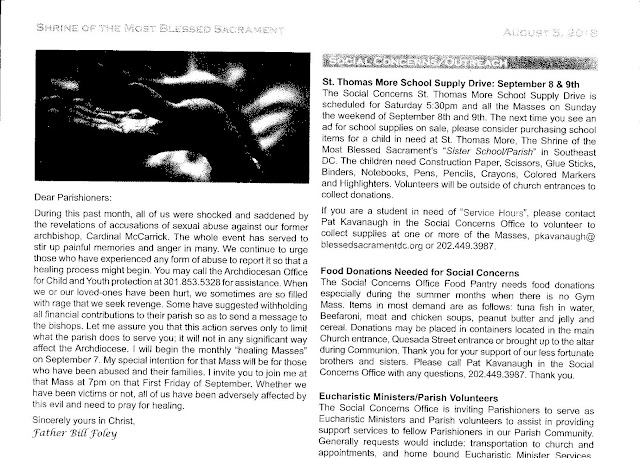 At first it starts out in a relatively conciliatory tone, but it isn't long before we get to the real heart of the matter.  Notice how he says that those harmed by the Cardinal might be "filled with rage" and "seek revenge".  That's rather pejorative language, don't you think?  That's a thinly-veiled attempt to cajole good people who've been hurt into not seeking redress for the harm done for them.

Regrettably, the only way we can do that is to withhold money.  Otherwise, the bishops will continue to brush off our concerns.  Cardinal Wuerl demonstrated that quite amply with his dismissive attitudes towards the laity, suggesting that:

Why does Father Foley not recall that?  Does he too think the laity are naive little bumpkins?  Moreover, if he's concerned about limiting "what the parish does to serve you", why doesn't he simply divulge to the congregation the donations that aren't assessed by the Archdiocese?  After all, he does opine that the withholding "will not in any significant way affect the Archdiocese", so what harm would assessment-free support do?  Yoo-hoo!  Are you listening, Father Foley??

I already laid out a strategy to starve the chancery beasts while supporting decent parishes.   One question that each Catholic will have to answer for themselves is whether or not their individual parish warrants support.  There is a matter of justice if you're attending Mass there, sitting in their pews, using their bathrooms, etc, that might require some minimum, even if the parish is lackluster.  By the way - Blessed Sacrament has been known to host pro-aborts, celebrate dissidents, etc.  In all fairness to Father Foley, these insults to the Faith occurred prior to his arrival there.

I haven't done too extensive a search, but I haven't seen any such dribble in any other parish bulletins.  Has anyone else?
Posted by Restore-DC-Catholicism at 8:57 PM