The Pope Has Uttered Heresy. Is The Seat Of Peter Vacant?

From the Catholic News Service (official news outlet of the USCCB), we read that the "pope revises catechism to say that death penalty is inadmissible".  With that the pope has squarely plopped himself into full-blown heresy.

It cannot be denied.  No pope can change Church teaching.  The Church's teachings are immutable for they emanate from God, who is Himself immutable.  Throughout the centuries the Church has always upheld the legitimacy and usefulness of capital punishment.  No one pope can turn around and contradict all his predecessors, Church Fathers, Doctors of the Church etc without pronouncing heresy. 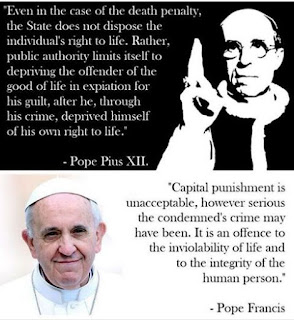 Many blogging colleagues have written excellent analyses of this latest antic of Pope Francis'.  Rather than "reinvent the wheel", I'll now link to them for your reference and reading.

This heresy needs to be put in some context.  I don't think I'm the only one to find it very interesting that the pope plopped this stinker just as we are all focused on the sodomite rapists among the episcopate.  In a saner time, they would be eligible for the death penalty, but I digress.

We also notice that this is happening as there is much discussion on:
The things stated above would all be heretical.  Might the push to demonize capital punishment be a "trial balloon", so to speak, to get faithful Catholics to swallow the false notion that immutable Church teaching can be "tweaked" here and there?  Some faithful Catholics might buy the canard that capital punishment might well be declared wrong in opposition to centuries of Tradition.  But right there, the camel has stuck his nose under the tent, for if Tradition can be disregarded with respect to capital punishment, why not with respect to contraception or homosexuality or divorce/remarriage or even abortion?

Formal heresy has been uttered.  Is Peter's seat vacant?
Posted by Restore-DC-Catholicism at 9:42 PM