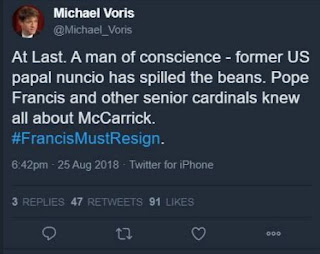 Archbishop Carlo Maria Vigano, former papal nuncio to the United States under Pope Benedict XVI, released a statement that said that Pope Francis participated in the cover-up for ex-cardinal McCarrick.  Furthermore, he stated that Pope Benedict had laid sanctions on McCarrick but these were lifted after Cardinal Bergoglio became Pope Francis.  Recall that McCarrick played a huge role in that election.  Many other prelates, the "usual suspects" were named by Vigano as being part of the cover-up.

One certainly must wonder now if Pope Benedict XVI resigned under duress.  I'll have more to say about this as I digest it.  Meanwhile I link now to the LifeSiteNews article.  It has the full English translation as well as links to downloadable pdfs; please download them for I can see where nefarious elements in the Church might want to pull these offline.  There is speculation that this testimony may call into question the continuance of Francis' papacy; as well it should.
Posted by Restore-DC-Catholicism at 11:40 PM