What They REALLY Mean By Clericalism!

A few days ago, Pope Francis released an open letter regarding the sex abuse scandal perpetrated most infamously by Bishop McCarrick and all too many others.  LifeSiteNews carries the full English text of that letter as well as an excellent analysis. 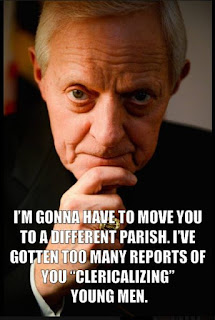 The pope states, without hesitation, that the culprit behind this squalid mess is...CLERICALISM!  That's right!  Nowhere in his tome is there one mention of the mortal sins of sodomy and other homosexual perversions.  To be clear, girls were victimized too, but the great bulk of the attacks - at least 75% - were carried out against post-pubescent males.  By definition, the attacks were homosexual in nature.  Also notice that while we see the words "clerics" and "priests" mentioned, there is not one instance of the word "bishop" being uttered.

I call notice to this "gem" uttered by the pope: I invite the entire holy faithful People of God to a penitential exercise of prayer and fasting, following the Lord’s command. This can awaken our conscience and arouse our solidarity and commitment to a culture of care that says “never again” to every form of abuse.

If he were directing this statement solely to the bishops and others who engaged in these crimes and/or covered them up, I'd applaud it.  But he isn't and that is one thing that demonstrates why this open letter is just another part of the "damage control".  Quite a goodly portion of the laity are aware at this time and more are opening their eyes with each passing day.  I daresay the chanceries are feeling the effects of our awareness as they see their collection revenues shrinking.  Is this an attempt to shame us into resumption of our donations - so that more lavish lifestyles and/or payouts can be financed?  The ones who need the "awakening of consciences" are those who pretend that "clericalism" is the root cause and not gay perversion.

As an aside, over twenty years ago I left a charismatic cult.  After I left, I did copious amounts of reading on cults and thought reform so that I could understand the dynamics of what happened to me as a young adult.  I learned that there are many varieties of thought-reform, and not all of them occur in the settings of a cult.  One tactic of thought-reform is known as "blaming the victim".  Basically it is used when the "leaders" of the cult abuse the rank-and-file members, and then direct them to blame the resultant pain on their own weakness, sinfulness, etc.  This screed issued by the pope reeks of that tactic.

If the pope tried delicately to shut us up, not all bishops shared his desire for tact.  Cardinal Sergio Obeso Rivera, a retired Mexican Archbishop, said some victims "who accuse men of the Church should be careful because they have long tails that are easily stepped on".  One can only hope that this is merely an attempt to embarrass the victims.  The only other possibility is that he issued a thinly-veiled threat of blackmail to the victims.  As you read that article, please note that he was created a cardinal just recently.  That means this current pope is responsible for his red hat.  One consolation is that he is over the age of 80 so he cannot participate in the next papal conclave. 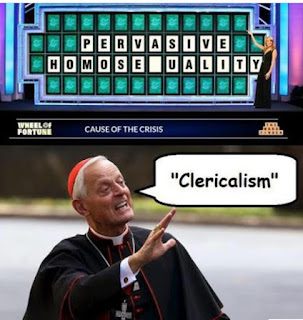 Over at the Not-At-All Catholic Reporter, we see Michael Sean Winters waxing apoplectic at the "anti-gay agenda".  Of course he's always shilled for sodomy and now he's pitching a hissy-fit at the "diabolical craziness of Church Militant and others" because what we've warned about is now coming to light.  And yes, we do want gay priests out of the priesthood.   The Church, in her wisdom, has always excluded homosexuals from the priesthood, knowing that those so afflicted would be unsuited for the role of "alter Christus".  Over 75% of these assault cases are homosexual in nature, despite the denials that Winters, the pope, etc try to use.

In their rantings against "clericalism". I think the pope et al are drafting a new definition of the word (getting back to thought-reform, that is a tactic known as "loading the language").  Might that definition be "ascribing responsibility of clerical and ecclesial sins to the faithful lay Catholics in the pews"?

IMPORTANT UPDATE - The state of Illinois is following Pennsylvania's lead and launching its own investigation into the Archdiocese of Chicago.  I believe it was Chicago's Cardinal Cupich that concocted the "clericalism" schtick.  The state of Missouri will also be investigating dioceses in that state.  We might well have a RICO investigation upon us.  The bishops might be kissing those federal funds (that is, our tax dollars) goodbye - or, as Cardinal Joseph Tobin might say, "nighty-night, baby bucks!"
Posted by Restore-DC-Catholicism at 9:52 PM