Laudato Si Is Here And It Is A Stinker

The much dreaded awaited encyclical is here.  The English version is on the Vatican website and I am in the process of wading through the mess.  Many of my colleagues were awaiting this with apprehension.  So far the encyclical is living down to all expectations.  Oh yes, there are the admonitions against abortion as one would hope in a Catholic document.  But as Voice of the Family notes in their statement, there is no such admonition against contraception.  In fact, I pulled the thing into Word and did a search for "contraception" - not one mention!

Michael Voris released a preliminary statement today and noted correctly that the science behind this thing - and it's splattered all throughout the thing as though it were Holy Writ - is by no means settled science.  Because the encyclical does not touch on either faith or morals, it does not bind the consciences of Catholics; Voris reminded us all of that.  In fact, Voris rightly points out the deadly results that would occur if the political and scientific policies suggested by the encyclical were to be implemented. 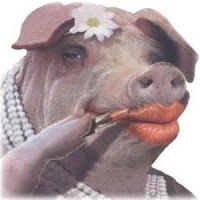 I do have one disagreement with Voris.  At 3:54 in the video, he seems to insinuate that Pope Francis, "whose good and kind nature could possibly, easily be taken advantage of by less scrupulous men", is somehow exhonorated from any responsibility for this encyclical.  No. This can't be blamed on "evil boogeymen who are leading him astray". The pope owns what he says and does. How long was he bishop and cardinal? He's been around the block too many times for us to believe that he's just a lovable, naive little bumpkin. Think on this: if he truly is so simplistic and gullible as to allow himself to be manipulated in such a manner, what business does he have leading the Church?  At best, the view of the pope being a naive "nice guy" is actually quite condescending.  The responsibility for this disastrous encyclical lies squarely on the shoulders of the pope.  There's no way one can put lipstick on that pig.
Posted by Restore-DC-Catholicism at 11:09 PM