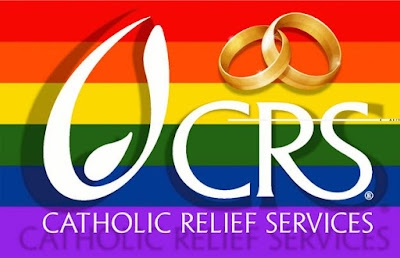 Lepanto Institute posted an announcement released by the Catholic Relief Services this afternoon.  Rick Estridge, the Vice President for Overseas Finance at the CRS - and a sodomite in a "same-sex marriage" has resigned his position.  Lepanto has some worthwhile discussion on the matter, as CRS heaped praise upon Estridge as they announced the retirement.

One might ask if CRS's announcement would have sung Estridge's praise had he been a white supremist or involved in drug trafficking. We think not.  Moreover, this resignation would not have taken over a month to have happened.  It would have happened in mid-April when Lepanto first broke the story, at the latest.  Ideally it would have happened much sooner than that, when CRS officials learned of Estridge's perversion and disregard for God's laws concerning marriage.

Please don't take this as a sign that Catholic Relief Services has finally seen the light.  They're in damage-control mode here.  They must have seen a drop in their donations; perhaps the May in-pew collection suffered as a result of their latest scandal.  The number of scandals at Catholic Relief Services is legion, and that number will increase since it's merely an arm of the likewise ill-begotten United States Conference of Catholic Bishops.  These beasts need to be starved; donote not one penny to them.
Posted by Restore-DC-Catholicism at 7:13 PM