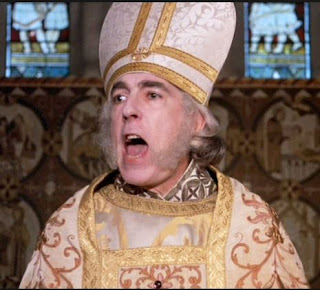 First let me explain the brand-new hashtag that I just concocted.  The term "gay marriage" is a farce, for there is no such thing.  God Himself has designed and defined marriage to be a life-long exclusive commitment between one man and one woman, ordered for their sanctification and the procreation and education of children.  That's it, nothing else.  I refuse to use the term "gay marriage" for I will not dignify mortal sin by calling it "marriage".  Therefore I will call their diabolical pretense "mowwidge".  While it may seem like mockery, I submit to my readers that what the gay progressives have been attempting all along is a mockery of marriage and by extension, the God Who created marriage.  Now how did I come up with this term?  Well, anyone who saw the movie "Princess Bride" will recall the character to the leftt, and the first word out of his mouth during the wedding scene.  Hence the hashtag #mowwidge!

At Mass today, our pastor made plain that we might have to engage in civil disobedience for we cannot obey laws that run counter to God's laws.  He cited Martin Luther King's "Letter from a Birmingham Jail" that outlined King's own thoughts and experiences with civil disobedience as he fought unjust discrimination laws in the early 1960s.  As you read the letter, you'll note that he invoked both St. Thomas Aquinas and St. Augustine of Hippo, both Doctors of the Church.

Other Christian leaders are also considering civil disobedience.  Reverend Bill Owens, president and founder of Coalition of African-American Pastors, said on Tuesday (prior to the Obergefell v Hodges ruling ) told Breitbart News that should the ruling happen (and it did), he envisioned "another civil rights movement of Christians of various churches and massive civil disobedience."  Read the article.

IMHO, he's spot-on correct.  Until we elect leaders with firm moral convictions and spinal fortitude, we'll have no alternative.  I'll now link to some helpful tips from the American Family Association and Alliance Defending Freedom.  There are measures that can be taken to stave off attacks from the get-go.  In any event, we must stand firm and pray to Our Lord for strength and guidance.
Posted by Restore-DC-Catholicism at 5:13 PM