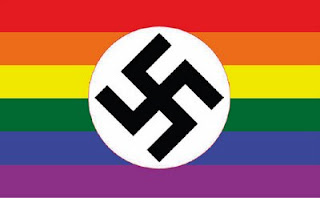 My blogging colleague, An Archdiocese of Washington Catholic, put up a post today detailing another attempt by the gay nazis to cause Knights of Columbus to disregarding their Catholic identity.  In this incident, I said "cause" instead of "coerce" because I don't think this particular council was aware that the birthday party that is scheduled to occur in their hall in August was a gay birthday party.

The blogger learned of this event from an article in today's Washington Post.  Ironically the article itself was occasioned by the refusal of a disk jockey company to serve the party owing to the presense of gays.  On one hand, one could argue that a birthday party per se is not inherently a celebration of sodomy.  However, consider that the dj would be playng music to which gays would be dancing with each other, presumably in "romantic" fashions.  So yes - indirectly this event will be a celebration of the gay lifestyle.

The article mentions that this party is scheduled to be held in a Knights of Columbus hall in August, located in Silver Spirng, MD.  Like my fellow blogger, I know of only one council in Silver Spring: the Rosensteel council.  Knowing how this council has supported pro-life efforts in the past (just last month I attended the Gabriel Network gala hosted at Rosensteel), I cannot believe that they realized the true nature of this event.  Now we must pray that they stand by Catholic principles as opposed to political correctness "Montgomery County style".  Pray and support this council in this.

We must also pray and vocally support Ultrasound DeeJays.  I commend them highly for holding true to their Christian principles.

As I learn further details I will relate.  If my readers learn anything new, please advise me via the comments section.
Posted by Restore-DC-Catholicism at 2:30 PM